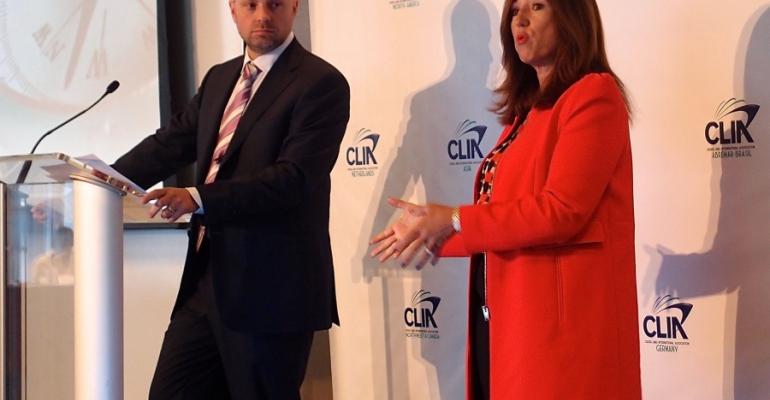 Christine Duffy - understands many of cruising's challenges and opportunities. She is pictured at a CLIA briefing with Carnival's Jim Berra, a future colleague
Christine Duffy's appointment to lead Carnival Cruise Lines is being hailed by cruise and retail leaders, while Duffy herself expressed excitement over her new role and the fact that more women in cruising are getting 'a seat at the table.' She's also committed to ensure a smooth transition at Cruise Lines International Association.

'I have big shoes to fill,' she said. Duffy talked on Wednesday with Cahill, who recently retired but 'who is there for me if I need him.'

Carnival had been seeking Cahill's successor for nearly a year as he stayed on past his desired retirement date.

Duffy related she'd been so busy and focused on CLIA—which she drove into a global organization, while engineering other dramatic changes—that she never consciously thought of running a cruise line though she figured at some point she would return to a corporate role.

When Carnival Corp. & plc ceo Arnold Donald asked her to consider the job, she didn't hesitate. 'How could anybody in the industry not consider it? Carnival is an iconic brand and an innovator,' Duffy said.

The appointment is the latest in a breathtaking swirl of cruise line president/chief executive changes, with companies both bringing in fresh blood and promoting internal talent. Women getting the chance to lead major brands—Jan Swartz at Princess Cruises, Lisa Lutoff-Perlo at Celebrity Cruises and, now, Duffy at Carnival—is 'fabulous,' she said, adding that diversity is a positive for any business and 'It's great to see more women at the table.'

An advocate for women executives, she has recognized 'the only way we get to sit at the table is because men decide to put us there.'

Duffy knew Donald since before he joined Carnival and before she joined CLIA. She had been with the corporate meetings giant Maritz in St. Louis, where Donald was based, and still lives.

'I have a lot of admiration and respect for Arnold as a leader and businessman. He has a big vision for Carnival Corporation and the opportunity to work directly for him and be a part of that is very exciting,' Duffy said.

An external candidate would have a lot to learn, especially taking on a 24-ship brand.

'The cruise industry is a complicated business,' Duffy noted. 'I have the advantage of this role at CLIA. I understand many of the issues and challenges the industry faces, and also the great opportunity to grow demand for cruising overall, and the importance of engagement with the trade.'

Areas that are less familiar include ship operations and itinerary planning, as well as understanding Carnival Cruise Lines' strategic plan. She wasn't ready to spell out any key challenges for the brand.

'There are a lot of things for me to learn but hopefully I will be able to contribute a lot as well,' she said.

Her focus over the next 30 days is to ensure a smooth transition with the CLIA team and the association's executive partners, member lines and travel agents. Duffy has spoken with incoming CLIA chairman Adam Goldstein, president and chief operating officer of Royal Caribbean Cruises Ltd., and will be drafting an internal plan in the next days.

It is expected CLIA will conduct a search for her successor. 'In the meantime, we have a strong team of leaders at CLIA, and I will continue to support them,' she said.

Duffy is proudest of CLIA's globalization and the shift to 'one industry, one voice,' what has been done to educate lawmakers about cruising, the launch of the new travel agent membership program and bringing CLIA under one roof in Washington, DC, where most trade associations are based and where CLIA can work closely with others to build consensus on key issues.

'CLIA's loss is Carnival's gain. I think she'll be great,' said Mark Conroy, veteran senior cruise executive and CLIA adviser, of Duffy helming the Fun Ships brand. 'You don't have to teach her the cruise business. She learned that at CLIA.'

In Conroy's view, Carnival has lost some momentum in recent years.

'They need to get that momentum back. Carnival used to be No. 1 with agents, consumers and the market. Royal Caribbean and NCL have stepped up. Carnival's not doing badly but the other guys have got a lot of momentum,' he said.

Carnival group veteran Rick Meadows, currently president of Seabourn and of Cunard Line North America, has known Duffy for years. 'I've enjoyed working with her very much and am looking forward to working with her in this new role. I think she'll do a terrific job,' he said.

'She's sharp, personable and someone who I think can really help Carnival not only better connect with travel agents with her existing relationships, but also brings strong leadership and vision,' Garcia added. Cruise Planners looks forward to 'what we'll see from her and Carnival moving ahead.'

Duffy will be moving from Philadelphia to South Florida for her new job, which starts Feb. 1. She has never sailed on a Fun Ship but is making plans for a family cruise on Dec. 28.

'What do you do after winning the Super Bowl? Take a cruise,' she quipped.