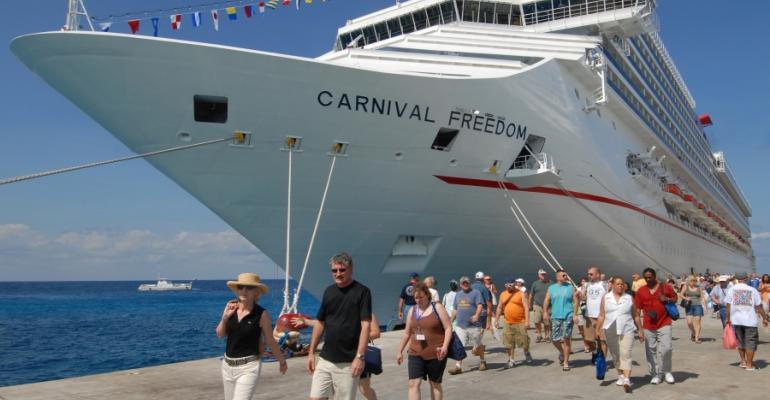 Carnival Freedom - heading to the Lone Star state in late 2015

Everything is big in Texas, as the saying goes, and when it comes to cruising, that means vast growth potential from a region with a strong economy, wide drive market, good airlift and plenty of cruise rookies. Lines are raising the stakes by sending more and bigger ships.

'There is so much potential,' said Terry Thornton, svp fleet deployment and port operations for Carnival Cruise Lines, which just announced plans for a third year-round Galveston vessel starting in late 2015.

The capacity increase can be 'easily absorbed,' in his view. 'The competition is fine. I don't think in any way are we over-saturating the market with competitors and our sister company.'

Galveston earlier nailed a five-year agreement with Royal Caribbean International, which has just gone to full-calendar operations with its first updated Voyager-class ship, Navigator of the Seas. Navigator will make way for a larger Freedom-class vessel, Liberty of the Seas, in autumn 2015.

Later this year at Houston, the return of Norwegian Cruise Line following a seven-year gap will spice things up. Both Norwegian and Princess Cruises, which started seasonal sailings in late 2013, are committed to winter operations from Houston's Bayport Cruise Terminal for several years.

Yet Carnival fields the most berths from Texas, and the just-announced Carnival Freedom addition makes a 38% capacity hike. The line will carry more than 600,000 passengers a year from Galveston.

It's one of the homeports that pulls in a higher percentage of first-time cruisers, according to Thornton, who said many of the markets supplying Galveston are under-penetrated compared to the rest of the country.

'We've got great ships in Galveston. If you're coming from California for the Western Caribbean, this is more affordable and it's a closer flight to Houston [than to South Florida],' Thornton said. Air prices stay competitive thanks to the hefty lift of the legacy carriers and a good selection of low-cost lines like Jet Blue and Southwest.

All three Carnival vessels will be fully loaded with Fun Ship 2.0 features and Carnival Freedom will sport the brand's newest family amenities.

'The Carnival product is perfect for that market,' Thornton said. 'It's more fun, not so serious or upscale,' and the Fun Ship 2.0 amenities 'resonate really well with our guests from Texas.' Despite last year's Carnival Triumph fiasco, that ship now gets some of the line's highest guest satisfaction ratings, as does Carnival Magic which came to Galveston as a brand-new ship in 2011.

Carnival Freedom is currently at Grand Bahama Shipyard getting new Fun Ship 2.0 additions and venues for the recently announced Camp Ocean children's program and the line’s first Dr. Seuss Bookville interactive reading venue. When the ship emerges May 3, it will return to Port Everglades service before joining the Galveston lineup in February 2015.

'We have a clear strategy of trying to expand homeports and itineraries with those ships that have all the Fun Ship 2.0 features. In Galveston we'll have the best of the best, full-featured ships,' Thornton said, adding that Carnival Freedom's children's innovations make 'a really, really great family experience.'

Galveston's long-term Royal Caribbean agreement provided for a $10m terminal expansion, and Carnival Freedom will benefit from the Cruise Terminal 2 enlargement to 150,000 square feet with seating capacity for about 1,000 people.

Western Caribbean cruises have been a staple but Carnival is branching out. The line began offering the market's first Eastern Caribbean cruises a little while back, and the latest news is a pair of longer itineraries for Carnival Triumph, 11 days to San Juan, and 10 days back, including several ports that are new or seldom visited by Carnival. Bonaire, for example.

Plus, to Texans, the Bahamas are fresh and appealing, offering a different kind of beach experience from their close-to-home destination, Mexico.

Thornton said Texas travel agents are delighted to have more diverse itineraries to sell and Carnival gets great support from key trade partners who appreciate the operator's long-time, year-round commitment.

Carnival will make a sizable marketing investment that kicks in later this fall. Included are traditional media and initiatives like the earlier announced multi-year partnership with a professional baseball franchise, the Frisco RoughRiders, plus Carnival LIVE performers.

It's likely other brands will boost marketing, too, raising awareness of cruises from the Lone Star state.