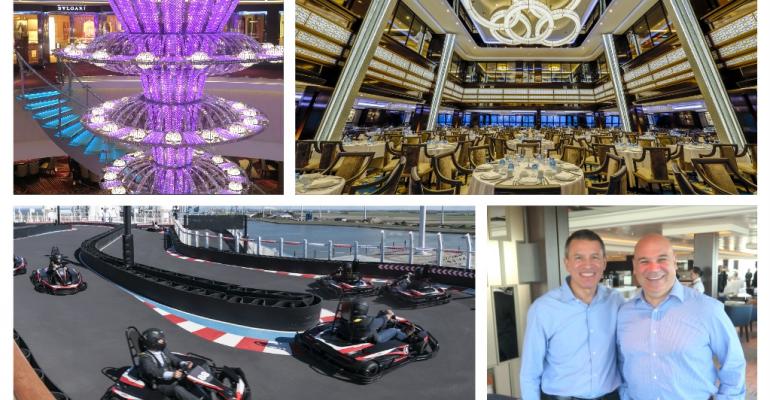 From top left, clockwise - atrium chandelier, The Manhattan Room, Andy Stuart and David Herrera in the Concierge Lounge, the first racetrack at sea

The go-kart racetrack and the virtual reality Galaxy Pavilion are Norwegian president and ceo Andy Stuart's favorite things. There's nothing like them anywhere afloat, he said.

Also, they cross cultures, like many things on Norwegian Joy. In some respects, the ship resembles sister Norwegian Escape. In others, it is highly customized for Chinese tastes.

Consultants and extensive market research helped inform planning for the ship, and builder Meyer Werft stepped up to incorporate the new areas.

'We've worked really hard to get this right. We've tried to be thoughtful and appropriate,' Stuart said. 'This is not a tweak.'

Of the 1,925 accommodations, there are more premium categories than on Norwegian Escape, including a new Concierge level with 126 large balcony staterooms. A spacious Concierge Lounge located above the bridge stretches the full width of the ship. For the first time, The Haven by Norwegian suites complex has an observation lounge with 180-degree views and, for passengers requiring the greatest privacy, a VVIP casino. Joy's Haven offers 74 suites.

Because Chinese like to travel with family, new inside rooms that sleep up to six people were created. They have two bedrooms and two bathrooms plus virtual balconies and two huge televisions that provide forward and aft views. For the first time, the Splash Academy, for kids 3-12, has a designated space where families can play together.

The Joy Theater will stage different shows each night, including 'Elements' with its soaring acrobats and special effects and the new 'Paradis,' a tribute to fabulous Parisian nightclubs with feathered and sequined showgirls. An LED video wall backs the stage and 10 3-D video projectors around the theater bring the audience into the show.

Eight karaoke rooms are available for groups, and the open-air team laser tag area is a first at sea.

In the Galaxy Pavilion, a rider can slip into an authentic 2009 Williams, a Formula 1 car, put on Oculus goggles and experience the sensations of a real Grand Prix race. Other stations pit four racers against each other, or give the feeling of flying a fighter jet, walking a plank 60 stories in the air or hang gliding. There's an interactive video wall for family games, and 7-D rooms offer all kinds of adventures.

'This was bloody expensive. But it was worth it. The response so far has been phenomenal,' said Simon Murray, entertainment director, newbuild planning and implementation.

Throughout the ship, there are many East-West juxtapositions. The Noodle Bar is near the American Diner. Norwegian's signature Ocean Loop and AquaRacer waterslides rise above Serenity Park, a space for tai chi and yoga with artificial grass and trees. The Joy Tea Room (in a location that's O'Sheehan's Bar & Grill on Norwegian Escape) serves teas Asian-style, while The Grand Tea Room features elegant English tea service with scones and finger sandwiches.

Signature NCL restaurants like Cagney's Steakhouse, La Cucina and Le Bistro are on board, along with Food Republic from Norwegian Escape. Two restaurants, Sakura and Hibiscus, have round tables with centers for hot pot or Korean barbecue dishes served family-style. Neptune's is a new seafood restaurant, and a Godiva Shop replaces the Bake Shop on other NCL ships. There's a Starbucks cafe in the atrium.

It's a fallacy that Chinese travelers seek a totally Western experience, according to Harry Sommer, evp international business development, Norwegian Cruise Line Holdings. Just as Americans enjoy a French restaurant but still like their burgers, Chinese want to taste international fare but have familiar food at least part of the time.

'You have to respect the unique aspects of the culture—the language, staff and food,' Sommer said. 'We're giving them a Western experience but also things they're comfortable with.'

All signage—down to the cocktail napkins—is in English and Mandarin. Nearly half of the guest-facing crew are Mandarin-speakers thanks to a partnership with a hotel school in Nanjing. The new hires have completed at least one contract on an NCL ship, and they'll continue rotating throughout the fleet.

'The balance of East and West, we nailed it,' said David Herrera, China president, NCLH, who called Norwegian Joy 'the right ship for China.' The company 'leveraged all the learnings from our past ships' to create this premium product that's being marketed in China with the motto 'First Class At Sea.'

'We tried to lift the quality,' Stuart said. 'It feels like a very rich ship. We're bringing the Norwegian brand to life with its freedom and flexibility. Our desire is to deliver the best ship to the Chinese market.'