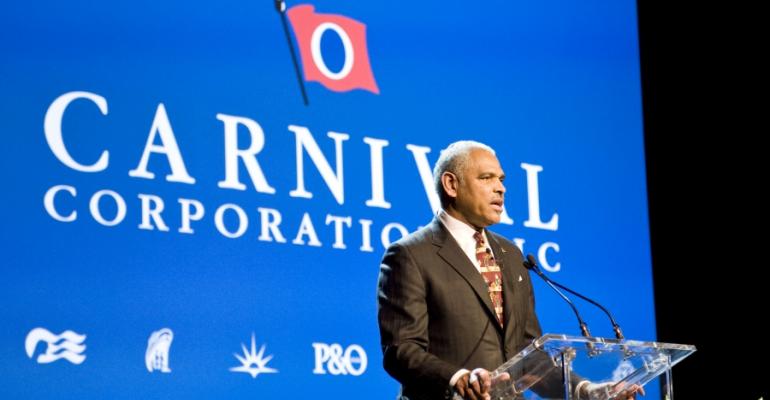 Arnold Donald - Carnival doesn't have to raise prices to do better, it just has to avoid discounting

Continental Europe, overall, has been challenged by economic issues and the refugee crisis, which is impacting all travel, not just cruising.

That said, 'Our European brands have performed well,' Carnival Corp. & plc president and ceo Arnold Donald told analysts, adding: 'I don't want to leave an impression they're stumbling and bumbling.'

He singled out Cunard's 175th anniversary events, the big splash from Britannia's introduction and AIDA Cruises continuing to perform well despite competitors' capacity increases. Also, while the AIDAprima delay has an impact, it's expected to be a 'fantastic' ship when it finally does arrive—anticipated for March a year from now.

A Costa ship will be moving to Asia as the company continues to ramp up capacity there, with six ships planned for China in 2016, up from four now. And that should help pricing in Europe.

While China yields 'may come down a bit' next year—and though that's 'plausible and possible,' it's too early to know, Donald clarified—returns can be accretive because of higher capacity in that market and reduced capacity in other markets.

Questioned repeatedly about pricing power, Donald told analysts Carnival doesn't have to raise prices to do better; it just has to avoid discounting. Thanks to added capacity, returns can be accretive even if there are some challenges with yields, he said.

Carnival's fourth quarter guidance, under analysts' expectations, was a sticking point on the earnings call.

However, Donald confirmed the Caribbean-heavy Carnival brand 'outperformed late last year and continues to outperform. There's a lot of momentum there. We feel very good about it.'