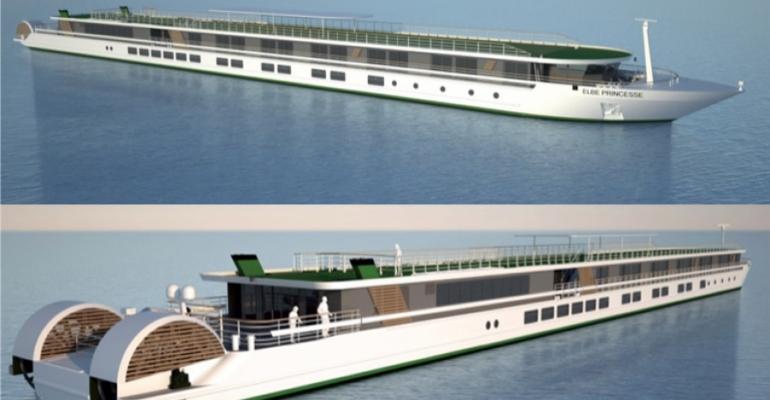 CroisiEurope's second paddlewheel ship Elbe Princesse has been launched by the Neopolia network in St Nazaire and will start cruising in April 2016 between Prague and Berlin.

The 95mtr long vessel was built in two blocks, and assembled over one month in Dry Dock No. 1 in Saint-Nazaire.

The fitting out will now continue at the Penhoët docks in Saint-Nazaire, and delivery is expected mid-February 2016—just one year short of the launching of the company's first paddle riverboat Loire Princesse. A third 110mtr long paddle riverboat has been ordered for construction at St Nazaire for delivery in 2018.

Several companies in the Neopolita network are equipping the ship: Shipelec for electricity; Gestal for networks; Composites for climate control and ventilation;

Its technical features and low draft allow the new ship to berth at the center of cities including Berlin, Potsdam, Lutherstadt Wittenberg, Dresden and Prague.

engines. Additionally, two pump-jets give the ship excellent maneuverability at low speeds. SDI was aided by the specialized design offices at Arco Marine, Ship ST and Hydocean. Acco built the superstructures and the two paddlewheels.

The exterior of the ship will have wood screen walls with backlighting. It can accommodate 80 passengers. The Elbe Princesse is CroisiEurope’s second paddlewheeler, after the MS Loire Princesse, and a third ship is planned for construction in Saint-Nazaire.

According to Hervé Germain, vp Neopolia Marine and manager of MYG Design, 'We are extremely lucky to be able to work with a strong cruise company—an undeniable expert in this type of market, who is ambitious and make it their goal to give priority to French-based businesses. We thank them for their continued confidence.'

Philippe Le Berre, vp of Neopolia Marine believes, 'Neopolia, with the support of its partners—the French regional and departmental administrations, the Metropolitan area of Saint-Naizaire and the region of Nantes— are playing their role to the hilt in order to increase development of local industry.'