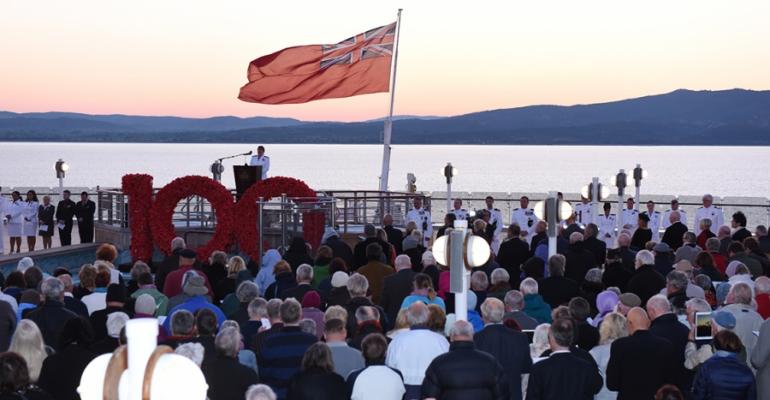 Almost 500 Australians and New Zealanders joined their fellow passengers on the decks of Cunard’s Queen Elizabeth for a memorial service as the ship sailed the waters off the Gallipoli Peninsula Friday morning.

Marking Cunard’s long-standing association with Australian and New Zealand wartime campaigns, including Gallipoli, the emotional ceremony saw the ship’s crew and guests lay wreaths in the water in remembrance of the soldiers who fought in the First World War campaign.

A two-metre high poppy wall floral tribute, shaped as ‘100’ to mark the Anzac centenary, formed the centrepiece for the ceremony. The wall was filled with 11,500 red poppies donated by Australians and New Zealanders during Queen Elizabeth’s calls to Auckland and Sydney as part of her current world cruise, with the flowers representing the number of Anzacs killed during the campaign.

Visitors to the poppy wall in Auckland and Sydney also wrote personal messages in a special remembrance book, with a selection of those read at this morning’s service. The book will be placed in the ship’s library where it will remain in memory of the heroes of Gallipoli.

Queen Elizabeth’s visit to the waters of Gallipoli on Anzac Day eve, comes during her 112-night world voyage. The ship will arrive into Istanbul early on Anzac Day when some guests will disembark to continue their journey to Gallipoli.

Captain Inger Klein Thorhauge said she was honoured to bring Queen Elizabeth’s guests to the waters of Gallipoli for such a significant occasion.

'The Anzac story resonates for all of us at Cunard. Our connection with the armed forces of Britain, New Zealand and Australia runs very deep. Cunard has supported the services going back to the Crimean War. During the First World War, 20 Cunard ships and many of their crew were lost. It is a legacy of service of which we at Cunard are very proud.'

Guests of honour at the service included Herb Christophers from New Zealand and Mark Keys from Australia, both descendants of Anzac soldiers, who travelled onboard Queen Elizabeth as custodians for the poppies on their journey to Gallipoli.

Some popular traditions that live on as Anzac folklore have been taken onboard Queen Elizabeth during its cruise to Gallipoli including a friendly game of ‘two-up’ played on the ship’s decks and Anzac biscuits served as part of the afternoon tea in the Queens Room.  The ship has also organised a screening of Peter Weir’s 1981 classic ‘Gallipoli’ movie as well as informative talks from Gallipoli historians.