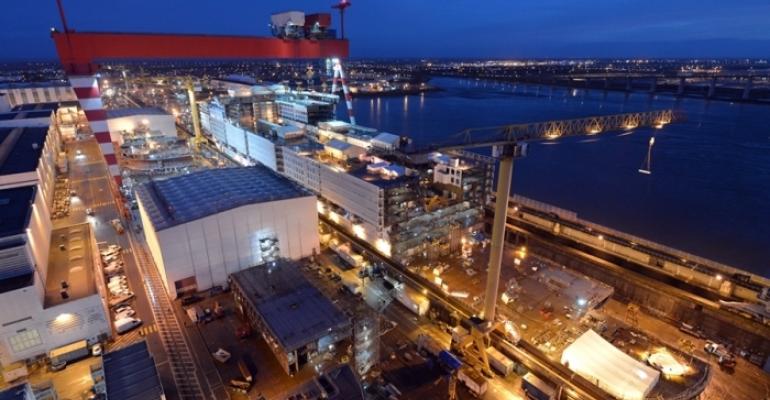 Fincantieri's bid to acquire STX France (pictured), which has reverted to its historic name, Chantiers de l'Atlantique, has been waging for two years

The European Commission's decision to examine Fincantieri's proposed acquisition of Chantiers de l’Atlantique on referral by French and German competition authorities may delay the deal.

Even if the acquisition does not reach the turnover thresholds set by the EU merger regulation for transactions notifiable to the European Commission, because of the French and German authorities' referral, the Directorate-General (DG) for Competition decided to launch an investigation.

According to the EU Merger Regulation, member states may ask the Commission to examine any concentration that does not have an EU dimension but affects trade within the single market and threatens to significantly affect competition within the member states making the request.

Harm to competition at European and global level?

The EU Competition DG is launching an investigation on the grounds the transaction 'could harm competition at the European and global level,' it said in this week's announcement, without providing further details.

Fincantieri will now have to report the transaction to the EU Competition DG and provide what Seatrade Cruise News understands will be the same considerations and facts already presented to the French and German competition authorities. The EU Competition DG has 25 working days from the notification to take a decision under phase one of the investigation. The merger at this point could be cleared, either unconditionally or subject to acceptable remedies.

If the merger still raises competition concerns, the EU DG could open a phase two investigation with a deeper analysis of the effects on competition for a final decision within 90 working days. The timeline could be briefly extended for both phases.

So it could be a lengthy process. Fincantieri's stock fell on the investigation announcement, and Italy's Corriere della Sera reported CEO Giuseppe Bono was anxious to close the deal, which could take up to one year in the worst-case scenario. Fincantieri reportedly doesn't believe France and Germany would move against Italy.

Based on the agreement signed last October under the French and Italian governments' umbrella, Fincantieri and France's Naval Group are expected to also establish a joint venture in the military shipbuilding sector.

This is the latest twist in a long and contested deal that began in early January 2017 when Fincantieri was selected as the preferred bidder for STX France. In April that year, Fincantieri and the French state signed a heads of agreement and in May, the Italian group announced its plan to acquire from STX Europe its 66.66% stake in STX France, the balance owned by French state.

However, in July 2017, the French government exercised its pre-emption right to acquire all of STX France's capital share capital, nationalizing the yard to buy time to renegotiate the sale. Subsequently, the Italian shipbuilder signed a share purchase agreement with the French state in February 2018 for 50% of the STX France share capital for €59.7m. (STX France has resumed its historic name, Chantiers de l’Atlantique.)

Based on a wider agreement in the maritime sector reached by the Italian and French governments in September 2017 and covering both civil and military shipbuilding, 1% of the French yard's share capital would be lent by France to Fincantieri for a 12-year period, giving it a majority stake contingent on Fincantieri keeping its commitments regarding employment and protection of the Saint-Nazaire yard's technical know-how. At the end of the 12 years, Fincantieri would have become the shipyard’s majority owner.

Fincantieri then submitted the deal on Nov. 9 to the French and German competition authorities. It was required to report in Germany because Fincantieri and Chantiers have turnover there which exceeds a certain threshold. The countries made their referrals to the EU Competition DG Nov. 24 and Nov. 30, respectively.

The European Commission elected to launch the probe, as announced this week.

'Certainly, it is not a choice that goes in the direction of creating "European champions,"' European Parliament president Antonio Tajani said. 'The adversaries are not inside the European Union; our opponents are the world giants.'

He added: ‘We should change the competition policy in the EU to allow European aggregations to be more competitive. According to Tajani, the rules worked well when the competition was within European borders. Today the world situation is different, he said, and the EU must ensure that large European companies are able to compete on a global level.

According to sources close to the French government cited by national and international newspapers this week, the state is confident there won’t be competition problems with the EU, even if the relationship between the Italian and French governments is strained—which could affect the acquisition's closing, analysts in both countries said.

Germany, of course, is home to Meyer Werft, a prominent cruise shipbuilder which opposes the deal, while in France there is growing opposition to selling industries to foreign entities. Various analysts have also read the referrals by French and German competition authorities to the European Commission as a way to further delay, change or eventually block the Fincantieri deal without appearing to have an anti-Europe stance.