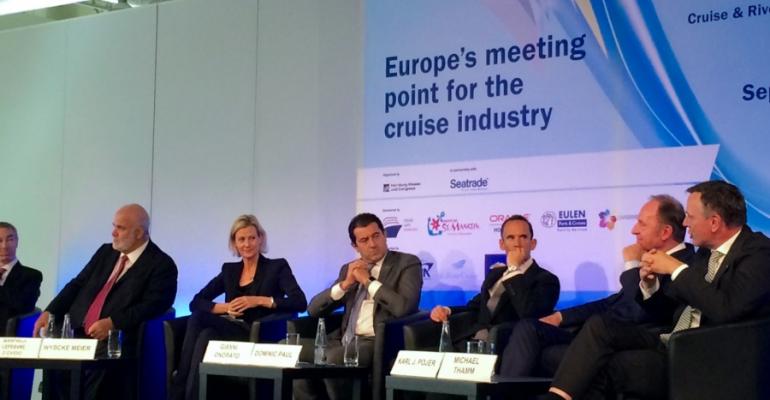 Europe’s leading cruise line executives aired concerns about geopolitical issues, port infrastructure, visa restrictions and the regulatory environment as they try to grow the market in Wednesday's opening State of the Industry panel at Seatrade Europe in Hamburg.

Referring to the Tunisian terrorist attacks earlier in the year, Carnival UK chairman David Dingle said whilst most of North Africa is off limits for cruising, as well as Ukraine, 'We are very good at finding new ports and new destinations.'

Silversea Cruises chairman Manfredi Lefebvre d’Ovidio echoed all the panelists' views that 'Terrorism is part of our lives and whilst attacks happen, the world is big enough to find alternative cruising grounds.'

On port infrastructure, Paul drew comparisons with Asia where he said governments and ports are extraordinarily keen to invest in growth, ‘yet we are not seeing that level of focus in Europe.’

Referring to the European regulators, Dingle said ‘Europe is good at regulating and stopping us doing things and not doing enough in helping us operate our ships and recognizing and supporting the cruise industry.’ With economic growth comes social expansion, he said.

‘With CLIA the industry has huge potential to influence the decision-makers, and we have to do it.’

On the subject of the EU Sulphur Directive, which is being interpreted differently by countries across the region, Dingle asked for speedy engagement and a better understanding of the cruise sector by Brussels.

‘We are not people to be wary of. We also want cleaner air over our ships in European ports but we want a partnership between the lines and the regulators,’ he said.

‘Clearly the migrant crisis is creating some nervousness but our job is to inform the EU what we are doing for our own screening and push to try and get the process simplified across Schengen countries,’ Dingle told the conference.

With only 1% of Europeans taking a cruise, should lines be doing more closer to home rather than trying to get more Asians to cruise in European waters? moderator Todd Benjamin asked.

'We have 25 ships so we can’t be everywhere,' Costa Group ceo Michael Thamm said. His focus is on the leading European source markets of Germany, UK, Italy, France and Spain, and Poland has potential, ‘but we have no office there.’

MSC Cruises ceo Gianni Onorato cited a lack of ships as constraining growth, which is why his company is building up to seven more.

‘We are leaving the Europeans at home because we are taking more ships to Asia,' Onorato said, adding that's why the visa situation is 'very important to us as we grow the local Asian markets. We want to be able to bring them to sail on our ships in Europe, which is why the visa application issue has to be speedier. ‘

Karl J. Pojer, ceo Hapag-Lloyd Cruises, said European source demand grows by having the right products at the right price: 'We need evolution on the one hand and innovation on the other.’ [See also separate story on the German source market.]

Regarding innovation, Thamm referred to the company’s ‘breakthrough’ order for four new LNG-powered ships signed earlier this year. ‘We will only fully understand the significance of these orders in retrospect,’ he stated.

On the issue of trying to relieve congestion in marquee ports, Dingle suggested: ‘As the on-board experience continues to evolve and it becomes more about the ship, it will take the pressure off cruise lines to always go to better known ports.’

Paul said whilst the ship is central to the experience, the destinations will always be important. He called the combination of an innovative on-board experience with the ability to visit five interesting places in a week ‘unbeatable’ in the vacation world.

Dingle suggested cruise operators not get hung up about congestion in places like Santorini as there are plenty of other interesting destinations to visit.

Pojer voiced the view that the heart of cruising is in the routing, and it's the destinations that make the difference—the combination is key.