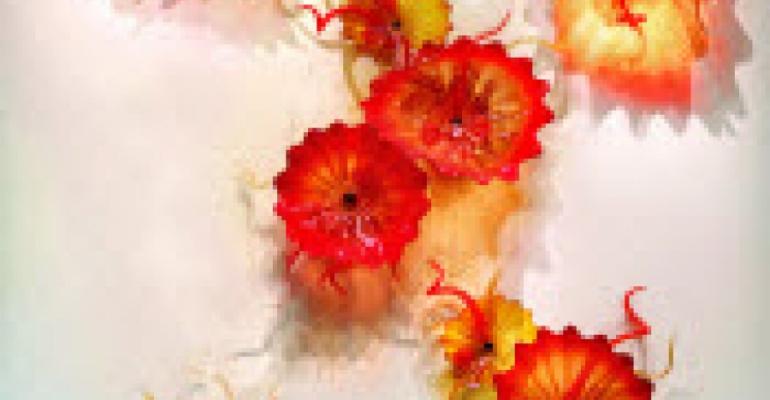 Renowned glass artist Dale Chihuly has created a wall sconce installation for Port Everglades, and to say that port officials are proud would be an understatement.

'When you are ranked among the world's best, of the highest caliber, a world-class facility, you attract first-rank cruise lines, their upscale customers and internationally acclaimed artists,' port chief executive and director Steven Cernak said. 'Chihuly is renowned for his ambitious architectural installations around the world in historic cities, museums and gardens.

'And now Port Everglades is the only seaport in the world to have a Chihuly.'

Chihuly designed five sculptural works and strategically clustered them in a 14-foot by 12-foot area. Buchan called the impact a 'wow.'

Passengers see Chihuly's dramatic flower-like forms that bloom larger and brighter on the lobby wall as they descend from the second-floor debark area to the first-floor baggage hall. The spiral and herringbone surfaces are lively and energetic. Exterior lighting casts colorful shadows on the wall behind the artwork.