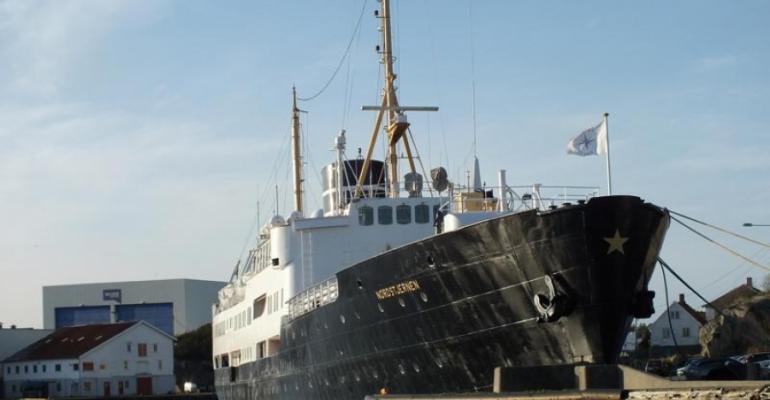 Nordstjernen - focus on 'nostalgia cruising' for Europe's No. 1 source market

The Norwegian operator Indre Nordhordland Dampbåtlag AS (INDL) will operate its 1956-built former Hurtigruten vessel, Nordstjernen, on four Baltic itineraries from Germany this autumn. Turnaround ports will be Hamburg, Stralsund, Glückstadt and Flensburg.

Nordstjernen will embark on its Baltic schedule in Hamburg on Sept. 11. The first seven-night cruise transits the Kiel Canal and calls at Kalmar, Visby, Christiansø and Szczecin before reaching the turnaround port, Stralsund, on Sept. 18.

On Sept. 27 the ship sails from Stralsund to Kolobrzeg, Gdansk, Kaliningrad, Gudhjem and via the Kiel Canal to Glückstadt on the northern shores of the Elbe River west of Hamburg.

Then Nordstjernen begins a four-night cruise on Oct. 4 to Heligoland, Faaborg and Ærøskøbing before the Baltic season comes to a close at Flensburg on Oct. 8.

The 2,191gt, 80.77-meter Nordstjernen was in service for Hurtigruten's Norwegian coastal route between Bergen and Kirkenes for 56 years until retired in 2012. In November that year the current owner acquired the ship, had it refurbished and restored in Gdansk and began operating nostalgic itineraries under the 'Vestland Classic' brand.

This summer Nordstjernen will again operate on charter to Hurtigruten in service to Svalbard prior to its brief Baltic season. The ship has 72 passenger cabins with a total 150 beds, but takes a maximum of 130 passengers. Some of the cabins are not yet equipped with private facilities, so passengers use a shared shower and WC on the corridor. Nordstjernen was grade-listed by the Norwegian authorities in 2012.

INDL/Vestland Classic is selling its new cruises exclusively through its German partner, Nuremberg-based International Tour Management Margit Distler. Distler has long experience in the industry, including as a Hurtigruten tour guide.

Nordstjernen is not only adding a nostalgia-focused product to the German market, it also puts new cruise ports on the map. Stralsund, for example, hopes the ship will open doors to other cruise operators.