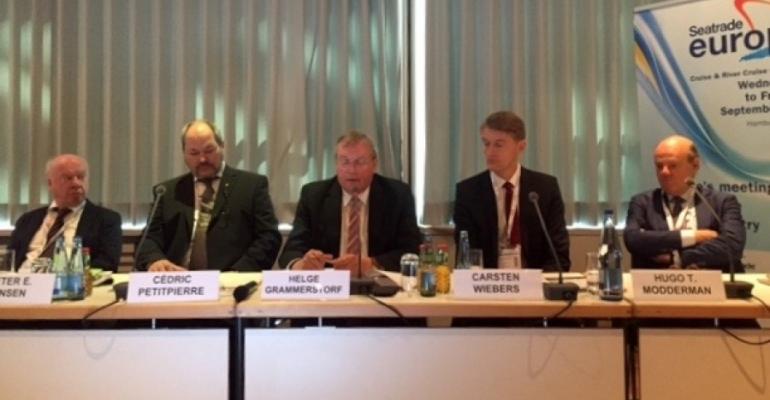 The outlook for cruise ship financing is bright on the rivers and oceans with private investors, especially, willing to put huge amounts into the industry's development, experts said at Seatrade Europe's 'Finance for Ocean and River Ships' session in Hamburg on Thursday.

Among others, Germany's closed-end funds model—known as the 'KG-model' and for decades a cornerstone of global ship financing—is on the way to return in a restyled fashion.

Closed-end funds used to have a total investment volume of €7.05bn in 2007 prior to the 2008 global recession, falling to only €0.081bn in 2014. But following new capital investment legislation passed two years ago in Germany and with the country's economy prospering, a modified KG-model is now staging a comeback, finance specialist Dieter E. Jansen told Seatrade Europe delegates.

'Closed-end funds are ready to finance ships again,' said Jansen, ceo of Dr Jansen Newsmedia, adding that more and more offers are available. According to him, some 40 funds are currently on the market with a rising trend, representing a volume of €3bn, 'an amount which may double within a year.'

As Jansen put it, money is just 'waiting for investment opportunities.'

Other speakers supported this view, with one even predicting an 'unlimited' amount is ready to be invested into cruising. Apart from the comeback of KG-models, Jansen predicted more institutional investors—family offices, pension funds and private equity—to increasingly become the cornerstone of cruise industry financing, together with foreign investments from the US and Asia.

Dolfinance md Hugo Modderman added there was relatively little interest in cruise industry investments some years ago, an attitude that has totally changed as the industry proved its resilience during the recent economic downturn. Modderman also predicted more private equity capital will move into the cruise sector. He said big operators would not have any difficulty attracting capital, while the situation may occasionally be more complex for small players.

Yet investors' appetite opens private equity funding even to this sector. Referring to the Silversea Cruises example, Modderman said leasing schemes may gain additional importance: 'In future we will see more of such leases,' he predicted.

Referring to the requirements for cruise companies aiming to access financing, Carsten Wiebers, global head maritime industries of Germany's KfW IPEX Bank, identified a strong brand as 'almost everything,' followed by sound corporate structures. He cited the example of Star Clippers to stress the available of financing is 'not a question of big or small' but rather of having an attractive market niche.

KfW IPEX is a strong player in ship financing, not at least on Europe's rivers, having arranged financing for 47 new river ships for Viking River Cruises so far, among others.

According to German cruise and ship financing specialist Helge Grammerstorf, the industry orderbook currently amounts to 45 ocean ships with a volume totaling about €30bn, as well as 34 new river ships for the 2015 to 2017 period totaling about €600m.