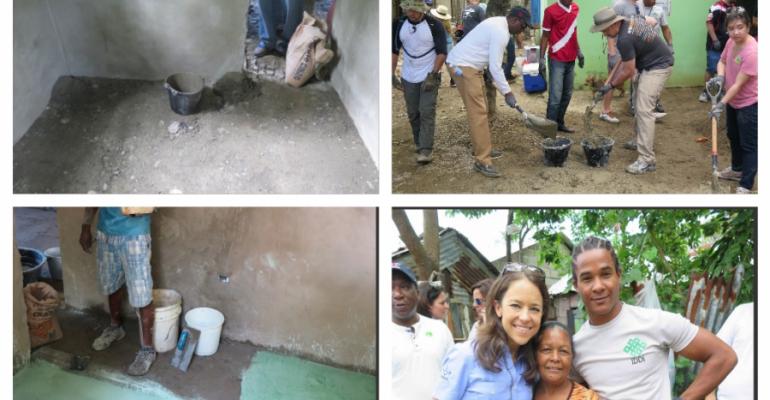 Fathom travelers replace a Dominican grandmother's dirt floors with concrete. From top left, clockwise: The floor before, volunteers at work mixing cement, Tara Russell with the happy homeowner, Amparo, and her grandson Lorenzo, the nearly finished floor in one room (Photos: Anne Kalosh)

From concrete floors poured for two families' homes to more than 2,400 trees planted, travelers on Fathom's inaugural voyage made an impact in the Dominican Republic in a variety of areas.

'Feedback from our guests during the voyage was extremely positive,' said Tara Russell, president of Fathom and global impact lead for Carnival Corp. She added that the week-long voyage, which ended Sunday, provided more evidence there is a growing market of people who want to make a positive, direct impact when traveling.

Fathom has a long-term, systematic partnership approach and business model of traveling every other week to the Dominican Republic, a combination aimed at creating sustained and lasting impact.

Fathom selected the Dominican Republic as its first impact destination since it is a country of great beauty and rich culture but also great needs. The average household income is less than $6,000 and more than 3m Dominicans do not have access to piped water. Yet the country has much potential. Its natural resources are plentiful, it has a good infrastructure that can allow for positive impact, and its people are motivated to create better lives for themselves and their families.

Impact activities in the Dominican Republic include a wide range of projects focused on economic development, education and the environment. During the inaugural voyage, passengers volunteered for projects and worked directly alongside local people and Fathom’s partner organizations, Entrena and the Instituto Dominicano de Desarrollo Integral.

During Adonia's 3.5-day stay alongside at Amber Cove Cruise Port near Puerto Plata, volunteer impacts were quantified. In the areas of student and community English conversation and learning, nearly 650 people benefited from foreign language interaction with native English speakers.

In reforestation and nursery projects, more than 2,400 trees were planted. Fifty water filters were produced for home use.

In the cacao and women’s chocolate cooperative project, Fathom volunteers cleaned more than 200 pounds of cacao nibs and wrapped more than 6,000 chocolate bars.

At a women's recycled paper and crafts entrepreneurship project, nearly 600 sheets of paper were produced.

When not participating in social impact projects, Fathom travelers participate in recreational, leisure and sightseeing activities in the Dominican Republic.