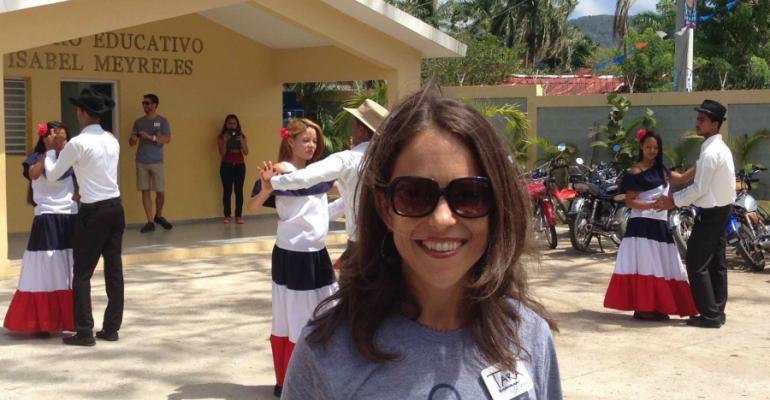 'A different kind of cruise that combines your love of travel with your desire to make a difference' is how Fathom, Carnival Corp. & plc's new social impact travel brand, presents itself. Because it's a novel concept for cruising, Fathom is a challenge to communicate and to understand until experienced.

Reporters who recently sampled Fathom's planned activities in the Dominican Republic put on hair nets to help make chocolate at a local women's collective. They joined schoolchildren learning a song, in English, then paired off to help the kids practice phrases and words from the song.

They heard a Dominican ceramics artisan tell of his project to create low-cost water filters for a country where many people are at risk for waterborne diseases and witnessed a town patriarch's joy at being presented one of the filters for his family's home.

These activities were a taste of some volunteer opportunities when Fathom's Adonia begins multi-day stays at the new Puerto Plata cruise port, Amber Cove. When not busy volunteering, passengers can relax at the beach, explore Puerto Plata's historic and cultural offerings, dine locally and take advantage of Amber Cove's recreational offerings.

Among the 25 reporters who previewed the operations, there were many enthusiasts and some skeptics.

Nancy Schretter, who founded The Family Travel Network in 1995 and, more recently, the nonprofit organization Together For Good, is knowledgeable about the type of travel Fathom espouses and the markets it targets.

She's impressed how Fathom's team of seasoned social impact leaders has assembled a range of 'worthy, community-driven programs' and crafted an experience that makes it possible for travelers to meaningfully contribute while also giving the flexibility to relax for those who may not wish to volunteer all day—or even to opt out, as may be the case with a working parent who needs a vacation while the kids volunteer.

The program incorporates the transportation to and from Amber Cove, ensures safety and security for participants and provides the comfortable lodging aboard ship.

All these elements would be time-consuming challenges for individuals looking to volunteer while traveling and for church groups and others planning such trips.

Schretter sees Fathom as a great opportunity for churches, schools, college alternative spring breaks, millennials, boomers, families and multigenerational travelers. She pointed out volunteering is important for millennials; research shows they highly value giving back. Plus, since millennials are such alpha influencers, they can sway the entire family's travel choices.

Fathom offers a 'transformational shared experience for the whole family. It's an incredible bonding opportunity,' Schretter summed up.

Instead of donating money or goods, people will be giving their time. This 'human capital' can really make a difference in the destination, Schretter said. Because Fathom will bring hundreds of volunteers to participate in Dominican Republic projects every other week, year-round, this can make a 'lasting, sustainable impact.' [See related story.]

While reporters sampling the Fathom activities seemed engaged in the work of the chocolate-producing collective and clearly enjoyed interacting with the schoolchildren learning English, some of the skeptics questioned the cost of Fathom's cruises and how students, for example, could afford a trip advertised as starting at $1,540 per person for an ocean-view room when the company launched in June. At launch, there was only one style of room that had been priced.

(Adonia will also sail to Cuba on alternate weeks, with fares starting at $1,800 plus approximately $500 in port fees and taxes.)

When Fathom was announced, UBS Investment Research noted the $1,540 rate was at a premium to the lead-in fares of some other seven-day Caribbean voyages at $950 to $1,200 for April sailings on the three largest broad-market brands.

While that's a positive from the investor/financial perspective, from the consumer standpoint, people shouldn't compare Fathom to a regular Caribbean cruise because so much more is involved, Schretter said. Similar social impact trips on land aren't cheap because they're hard work to set up, including identifying meaningful and sustainable projects, contributing to local partner organizations, measuring and tracking impacts, transportation and logistics, and all the liability issues.

With Fathom there's no international air cost, and Schretter said the cruise ship lodgings are likely superior to the basic accommodations of most land-based volunteer programs.

The Adonia transit time—the days sailing from Miami to Puerto Plata and back—are 'very important because you have time to prepare, bond and get focused so you're ready to go,' Schretter observed. 'Coming back, everyone has had amazing experiences so you have time to share and think about what can we do as individual to make this impact continue and to keep connected with the local community?'

Some reporters and cruise industry veterans wonder if there's a deep enough market to sustain Fathom's 710-passenger capacity, week in, week out, and if the Dominican Republic program will be a tougher sell than Cuba.

'I think there are going to be enough people who want to do this,' Schretter told Seatrade Cruise News, adding that it may take until Fathom is operating, with travelers coming back and sharing their experiences, for the concept to catch on.

Volunteerism and social impact travel are huge areas and getting bigger, she said.

In the cruise realm, Crystal introduced free 'voluntourism' excursions awhile back and keeps adding more to meet demand. Masses of travelers walk the decks of Holland America Line ships to support cancer research, and Royal Caribbean has added 'Caring Discoveries' paid excursions that help wildlife, the environment and communities. Micato Safaris, a venerable supplier of cruise land programs, is renowned for its nonprofit AmericaShare to support schools, libraries and other initiatives in Kenya.

Since there's growing demand for these types of trips on land, Schretter sees Fathom as a way for Carnival Corp. to 'get more first-time cruisers and a greater share of the overall vacation market.'

When she visited the Dominican Republic to look at Fathom's plans, Schretter was touched by people flocking to Puerto Plata's main plaza for a welcome ceremony with local officials and a folkloric festival that will be offered for every ship visit to Amber Cove (where calls begin Oct. 6 with Carnival Victory). Residents expressed 'how much they want this whole effort—both Fathom and Amber Cove—and how important it will be to succeed,' she said.

Fathom considered a number of destinations before selecting the Dominican Republic, according to Tara Russell, the brand's president and global impact lead for Carnival Corp. & plc. Most of all, she said, it was the Dominicans' enthusiasm for partnering on various social programs.

'We see a remarkable opportunity. People are so eager to have this port open and have people come visit. We're excited about the impact this can make in people's lives,' Russell said.

Fathom is building models in the Dominican Republic that could be used elsewhere in the world, she added.

Carnival Corp. has 'remarkable assets,' Russell noted, citing 700 destinations visited globally by a fleet of more than 100 ships. In her view, this can be leveraged for scalable social impact.

Fathom, she said, is 'just the beginning.'