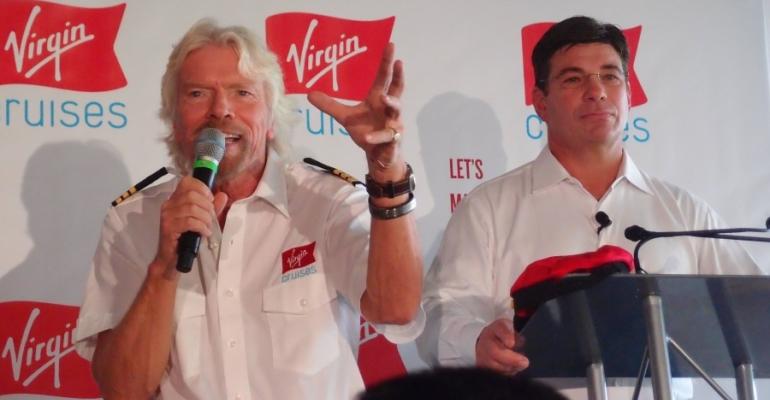 Virgin Cruises signed a binding letter of intent to build three 'boutique' ships—110,000gt each—at Fincantieri, to begin sailing in early 2020, 2021 and 2022. Sir Richard Branson and Virgin Cruises president and ceo Tom McAlpin broke the news before a crowd of media and officials in Miami.

McAlpin also revealed Virgin Cruises has selected PortMiami as the base for its first ship. He called Miami a 'vibrant, red hot, sassy, sexy city.'

Virgin and Fincantieri are committed to signing a contract in the fourth quarter this year. The ship design is still at an early stage, McAlpin said, and the company eagerly seeks input from the public and travel agents about features they would like to see.

'We're going to sail against the trend and build smaller, boutique vessels. Megaships didn't make sense to us, based on our customers' desires,' McAlpin said. He added: 'We want our consumers to be a part of [the design]. We want feedback.'

The line is taking suggestions at the newly launched virgincruises.com.

For Fincantieri's part, 'We are very excited about building ships for Mr. Branson,' chairman Vincenzo Petrone said, citing the Virgin Group's legendary 'creativity and originality ... They are designing a very special concept.'

No price was disclosed, but Branson told Seatrade Cruise News the investment is 'under $2bn anyway.'

Ryan Cotton, a managing director of Bain Capital, Virgin Cruises' lead shareholder, said Bain is excited to contribute its expertise in building great consumer brands. 'We believe there is a large, underserved market and strong growth prospects for a cruise line that delivers a superior experience for young-at-heart customers,' Cotton said.

Emerging through a cloud of iconic Virgin red smoke, Branson flew across Miami’s Biscayne Bay via helicopter, landing at Museum Park. Joined by McAlpin, the two raised a Virgin Cruises flag to mark the cruise line’s official arrival in Miami.

Virgin Cruises plans to offer a range of seven-day Caribbean itineraries, with a Sunday sail date. Miami-Dade County commissioners will meet June 30 to consider for approval a five-year agreement with an optional five-year extension for Virgin to operate at PortMiami.

PortMiami director Juan Kuryla expressed 'how excited we are and how honored we are that we were chosen.' He called it a team effort, and credited the help of Kevin Lynskey, deputy port director; Fred Wong, assistant port director - operations; and Hydi Webb, acting assistant director, business development & marketing.

McAlpin said a lawsuit filed by cruise executive Colin Veitch over the Virgin cruise concept 'is not going to slow us down.' Branson added: 'There's no merit in this. We're not going to waste our time on it.'

On a lighter note, Branson—who turned up at the event in shorts and a captain's cap—pulled out scissors and snipped off the neckties of PortMiami's Kuryla, Fincantieri chairman Petrone and Miami-Dade County Mayor Carlos Gimenez to advocate for a more casual, Virgin style of doing business.

'We will pass an ordinance forbidding ties from now on,' Gimenez quipped.