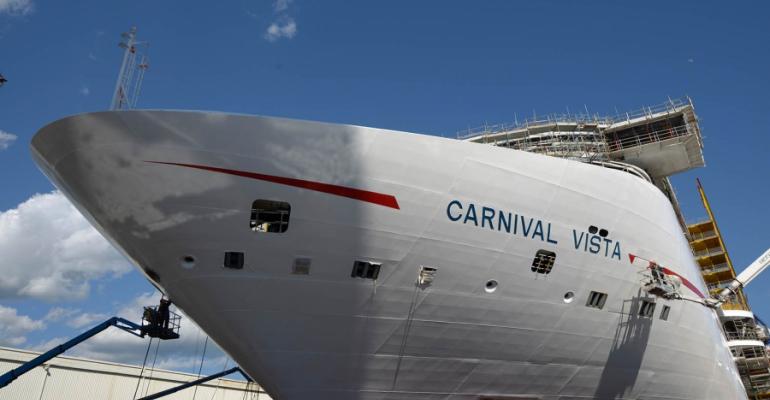 Carnival Vista due for delivery next spring
Fincantieri celebrated a double today as Carnival Vista, Carnival Cruise Line’s newest ship, was launched  at the group’s yard in Monfalcone and Viking Sea, the second of a series of three ships for Viking Ocean Cruises, was launched in Ancona. Interior fittings will now begin on both ships, with delivery scheduled in spring 2016.

Carnival Vista's launch was marked with the traditional welding of a silver dollar on the top deck of the ship. Godmothers for the ceremony were Heidi and Kye Heald, the wife and daughter of John Heald, brand ambassador of Carnival Corporation.

The ceremony was attended by Ben Clement, vp newbuilds and refurbishment of Carnival Cruise Line, while Fincantieri was represented by, among others, Gabriele Cocco, senior executive, vp merchant ships business unit, and Attilio Dapelo, director of the Monfalcone shipyard.

On-board features include an IMAX 3-D cinema, a micro-brewery and the exclusive Havana area, a themed private access space with cabins, outdoor bar and a swimming pool.

Meanwhile, in Ancona, 47,800gt Viking Sea's ceremony was attended by Karine Hagen, godmother of the launching and daughter of Torstein Hagen, founder and chaiman of Viking Cruises, while Fincantieri was represented, among others, by Giovanni Stecconi, director of the Ancona yard.

Fincantieri's Ancona yard is already working on Viking Sky, the third in series, due to be handed over at the beginning of 2017.

Fincantieri has built 70 cruise ships since 1990 and another 14 ships are currently being designed or built in the group's yards.