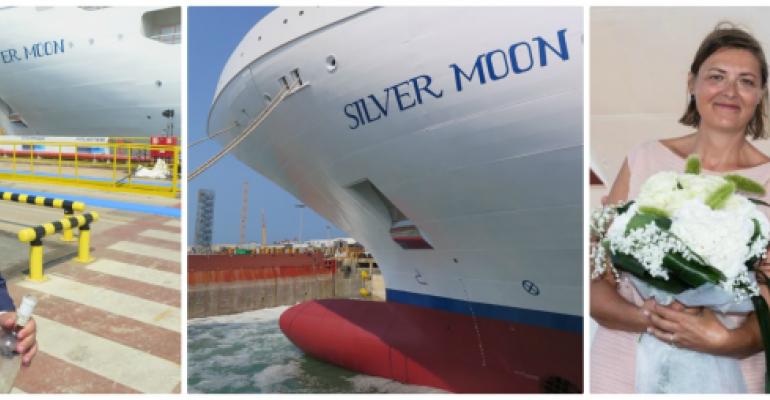 Fincantieri's Ancona shipyard floated out Silver Moon Thursday in festivities near the Arch of Trajan in this ancient Adriatic port.

Fincantieri employee Roberta Bonisiol served as madrina for the launch, welding a lucky coin into Silver Moon's superstructure and chopping a cord that sent a bottle of bubbly smashing against the hull.

'Made In Italy' with Silversea glamour

In proceedings hosted by Ancona yard director Giovanni Stecconi, a Fincantieri emcee noted the ship combines a 'Made In Italy' stamp with Silversea glamour and represents the return of the luxury line to Ancona, where it had built Silver Spirit in 2009.

The 40,700gt Silver Moon is the sister of 2017's Silver Muse, built at Sestri Ponente shipyard. Silver Dawn is set for delivery in 2021 and Silversea holds an option for a fourth sister that, if exercised, would arrive in 2023.

Shipping scion and Silversea Chairman Manfredi Lefebvre d’Ovidio noted he was brought up with ships — attending his first launch at the age of 12 with his father — and with Fincantieri, where they first built for Sitmar in 1987.

Lefebrve's father had dreamed of a fleet of 12, and Silver Moon, he noted, is another step toward that. (It's number nine.)

Silver Moon is scheduled for delivery in July 2020 and will sail its first revenue cruise from another Adriatic city, Trieste, on Aug. 6, after its naming festivities there.

Lefebvre spoke of the 'whispered elegance' that this 596-passenger series of all-suite ships brings to cruising.

And Silver Moon will debut the line's immersive new culinary program, S.A.L.T. — which stands for Sea and Land Taste — that Director Adam Sachs described as a 'holistic combination' of shore excursions and enrichment on board.

The ship has three new venues: S.A.L.T. Kitchen, offering an ever-changing menu of regional dishes; S.A.L.T. Bar, pouring regional wines and spirits; and S.A.L.T. Lab, where participants can learn about local ingredients and artisanal techniques via workshops, tastings and demonstrations.

For example, from the Adriatic region, S.A.L.T. would highlight the ancient grains that grow in the hills around Fermo which are used by artisanal pasta-maker Massimo Mancini, oysters from the Bay of Mali Ston and Prosciutto di San Daniele.

Other new features of Silver Moon include expanded Atlantide and La Dame restaurants, with La Dame featuring Lalique crystal panels; a new design for the Dolce Vita lounge; and a redesigned Spa and Fitness Center with indoor/outdoor areas.