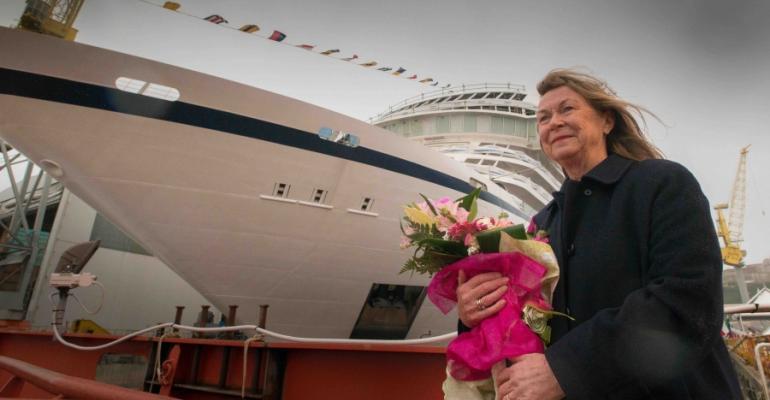 Viking Sky, the third of six newbuilds Viking Ocean Cruises has ordered from Fincantieri, was floated out early Wednesday at the Ancona shipyard in a ceremony attended by Viking chairman Torstein Hagen, with his sister, Marit Barstad, serving as madrina for the launch.

The event took place on the eve of Viking Sea's delivery from Ancona.

Fincantieri was represented by, among others, Giovanni Stecconi, director of the shipyard.

'Our first ship, Viking Star, has enjoyed great success in her maiden season. I look forward to her five sister ships experiencing the same respective success as they debut over the coming years,' Hagen said.

Barstad welded commemorative coins under the ship’s mast that represented three family birth years: 1911 (mother Ragnhild 'Mamsen' Hagen, namesake for the Norwegian deli Mamsen’s on board, 1943 (Barstad’s birth year) and 1948 (Hagen’s birth year). The madrina then cut a cord to allow water to begin flowing into the building dock.

Interior outfitting for Viking Sky will now begin in preparation for its scheduled delivery in February 2017. The 47,800gt ship will have capacity for 930 passengers.