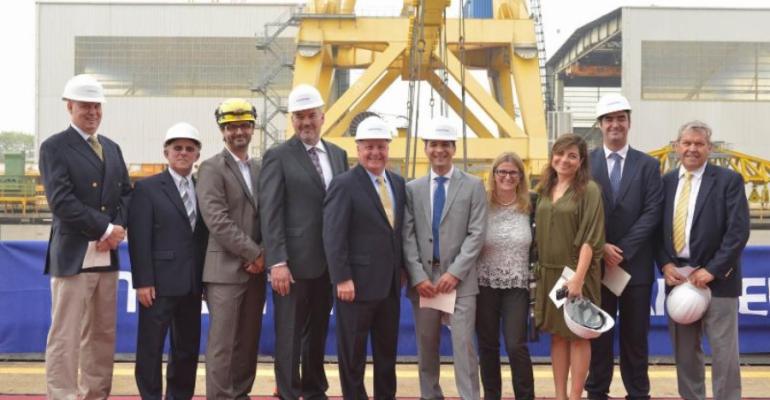 Officials from Seabourn and Fincantieri joined the Marghera festivities

The keel-laying ceremony for Seabourn Encore, the first of two ultra-luxury cruise ships Fincantieri is building for Seabourn, was held today at the Marghera shipyard.

'This is an important milestone and we look forward to revealing further progress and highlights of Seabourn Encore in the months ahead,' Seabourn president Rick Meadows said.

Seabourn Encore is due to join the Seabourn fleet at the end of 2016.

The all-suite ship will be approximately 41,700gt, 210mtr long and 28mtr wide and will be able to reach a cruising speed of 18.6 knots. It will carry up to 600 passengers, double occupancy. Every suite will feature a private veranda.

Fuel consumption will be significantly reduced by optimizing the ship's hydrodynamics.

Fincantieri has built 70 cruise ships since 1990 and another 14 ships are being designed or built in the group's yards.