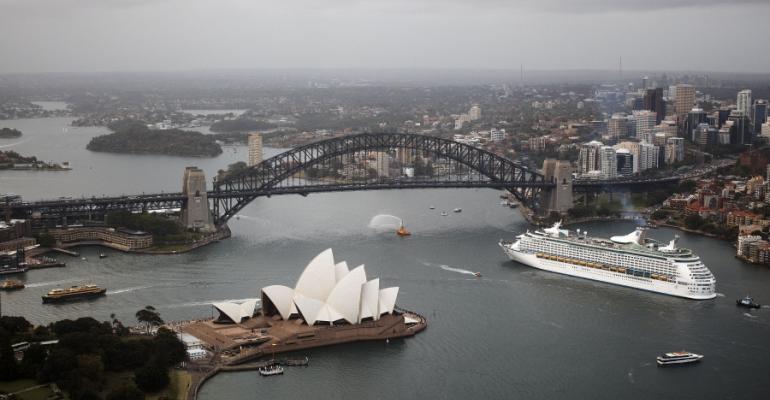 Emerging destinations including Australia, South Pacific and Asia accounted for 10% of global capacity. Pictured: Voyager of the Seas in Sydney

Passenger and crew onshore visits totaled 114.87m in 2013, generating $52.31bn in direct expenditures, including cruise line spending for goods and services in destinations around the world.

The spending and employment—direct, indirect and induced—generated total global output of $117.15bn.

The figures were announced at the Seatrade Med opening news conference Monday at the Port of Barcelona's World Trade Center.

Over the 10 years from 2003 to 2013, demand for cruising worldwide has increased 77%, from 12m to 21.3m passengers. During the decade, passenger numbers sourced from North America increased by 44% and the region remains the dominant market. North America's global share was 55.5% in 2013.

The emerging destinations of Australia, South Pacific and Asia accounted for 10% of global capacity, whilst the traditional cruising arenas of US, Caribbean and Europe remained strong, said CLIA's Didier Scaillet, vp business development. Europe as a whole has seen bed-day capacity increase by 172% over the last decade, rising from 18.2m bed-days to 49.6m.

The findings were assembled from various national and regional studies by Business Research and Economic Advisors.

BREA also produced a separate report for CLIA singling out US economic impact.