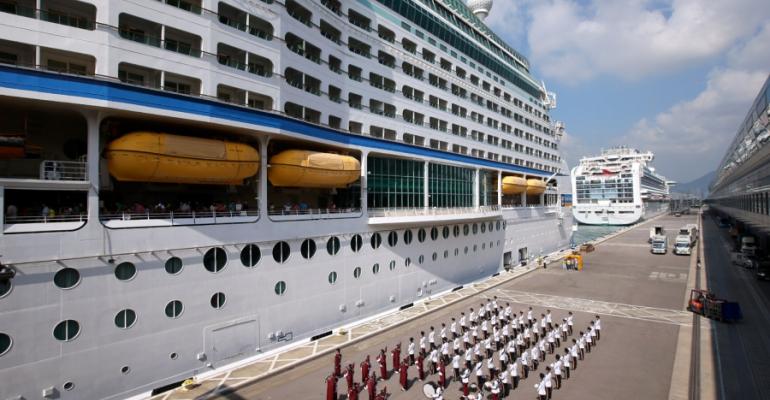 Voyager of the Seas, foreground, and Sapphire Princess were side by side Monday

Violent protests by thousands on the weekend trickled over to Monday, forcing some banks and businesses to close and pushing the stock exchange lower.

News reports said sympathizers were joining the ranks of what began as a student-led protest after police used tear gas, batons and pepper spray on Sunday. The demonstrators want Hong Kong residents to get to vote for the territory's next chief executive in 2017 instead of a committee choosing the candidates.

The only disruption to Destination Asia Hong Kong's scheduled tour departures was the cancellation of the Hong Kong Island excursion. The company, which didn't handle Voyager of the Seas or Sapphire Princess, said transfers, shuttle bus services and the airport trains were running normally, but warned travelers to expect delays.

Neither Princess Cruises nor Royal Caribbean's US offices immediately responded to questions about any impact on cruise operations from the demonstrations. A Princess spokeswoman later said she would try to get information.

Meanwhile, Kai Tak Cruise Terminal, operated by Worldwide Cruise Terminals, berthed the two large ships with a combined capacity of more than 6,000 passengers. It was the first use of the second berth.

Since the facility began operating in June last year, it has handled 28 calls and more than 100,000 passengers. Twenty-eight calls are currently estimated for calendar 2014, and 55 to date are booked for 2015.

Royal Caribbean announced earlier that Voyager of the Seas would homeport at the Kai Tak Cruise Terminal for more than 20 sailings between June and October 2015. The itineraries will include ports in China, Taiwan, Japan, South Korea and Vietnam as Voyager of the Seas becomes the largest cruise ship to homeport in Hong Kong.

In a news release that did not mention the demonstrations, Jeff Bent, managing director of Worldwide Cruise Terminals, expressed satisfaction with the simultaneous berthing of Sapphire Princess and Voyager of the Seas. He said the facility has been steadily receiving new bookings for next year and 2016, including from brands like Holland America and Seabourn that are new to Kai Tak, and from AIDA Cruises, which is new to Hong Kong.

The Kai Tak Cruise Terminal has about 5,600 square meters of commercial space. The commercial areas at both ends of the second floor have been leased and began operating in stages starting last month. Among them are retail shops with high-end brands, food and beverage outlets, a Chinese banquet venue, Western restaurant and Hong Kong-style café.

An additional shop at the rooftop park has been leased to a marriage registration service company. Numerous community activities have taken place at the park, including a community planting activity, school picnics and an inter-school drawing competition.