A first look inside MSC Seaview: the ship that follows the sun 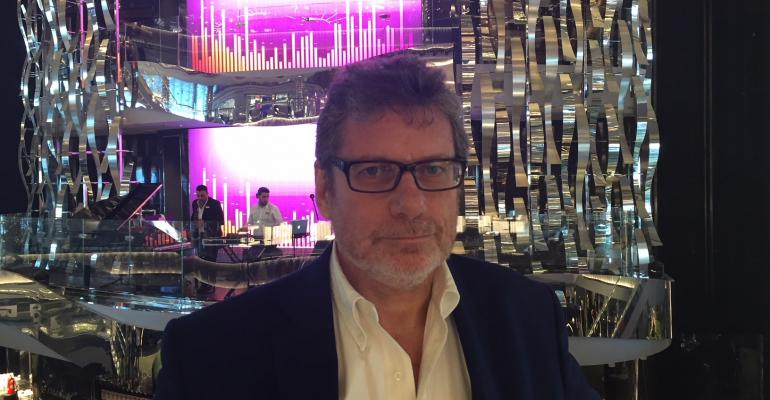 MSC Seaview's four deck atrium is a favourite spot of interior designer Marco de Jorio
MSC Seaview, due to enter service on Sunday following a gala naming ceremony in Genoa tonight, is an exact sister of MSC Seaside (sailing out of Miami) but sporting some new venue names, colours and decor with a Mediterranean touch in many places to match the ship's destination for summer 2018.

Designed by Fincantieri's Maurizio Cergol, the structure is built to bring guests closer to the sea than ever before including elements such as Deck 8 waterfront boardwalk with outdoor seating for bars and restaurants and glass-floored catwalks and terraced balcony cabins.

It has 3.2sq mtr of open deck per guest which MSC Cruises' ceo Gianni Onorato says is the highest in the industry.

'It is also inspired by the great transatlantic liners, in that the engines are located in the middle of the ship, which is not common on recently built cruise vessels and allows for better weight distribution, better stability, more outside balconies and the unique waterfront boardwalk,' explained MSC Cruises' executive chairman Pierfrancesco Vago.

The new flagship, the 15th ship in the MSC Cruises fleet, sports the flows and curves of her sister with distinctive aft superstructure resembling condominium towers rising above a sun deck with pool.

Glass elevators link the main pool areas on Decks 7 and 16.

Vago and Raphaela Aponte, the wife of MSC founder Gianluigi Aponte, have once again inspired the interior design delivered in the main by De Jorio Design International with the exception of the outdoor pools, the two buffet restaurants, vast children's area, Sport's Bar and Chef's Central which are the work of Tillberg and Y&S Architects.

'This ship has a mid aft and mid forward elevator stack meaning the mid public areas are accessible in a loop from the four deck atrium,' explained designer Marco de Jorio as he showed Seatrade Cruise News around some of his favourite areas.

We start on the lower floor of the atrium on Deck 5 and look upwards to see MSC's signature Swarovski crystal staircases, plus stages and LED screens at each level providing entertainment all day long and well into the night.

'It is not a very tall space but one deck higher than Meraviglia and use of mirrors, glass and silver gives it a very spacious feel,' noted the Italian designer.

During a two-day preview of the ship for travel partners and media and MSC employees from around the globe, it was quite evident this is the heart of the ship, with the 30mtr bar on the lower floor a constant hive of activity with people sipping coffee alongside others drinking cocktails and all enjoying live or recorded music ranging from classical to jazz to livelier late-night dance music.

'This space has proved extremely popular on Seaside and I can see it repeating on Seaview,' de Jorio said.

Moving upwards, still overlooking the atrium, on Deck 6 is the trendy Shine Bar, situated near the main dining room (one of two onboard), and then on Deck 7 a striking Champagne Bar with 60s retro seats 'very chic and very comfortable' according to de Jorio, serving a vast selection of champagnes, sparkling wines and cocktails.

'This is one of my favourite places - contemporary and very modern,' said de Jorio.

Onto Deck 8, another of his favourites, the warm friendly French bistro, L'Atelier Bistrot with a bar on one side and a 77 seater restaurant on the other serving finest French products.

Seven production shows—one for every night of the cruise—are staged in the two-tiered 934-seat Odean Theatre, designed with a Greek Olympics-style decor.

The Garage Club, one of 20 bars and lounges onboard,  dedicated to teenagers in the day and club at night, takes American Graffiti for its inspiration expalins de Jorio and includes half a 60s American style car painted bright orange, which acts as a the DJ booth.

High up on Deck 16, are found the Chef's Court speciaty restaurant cluster with Ocean Cay by Ramón Freixa, a luxury seafood restuarant created in partnership with the two Michelin starred Spanish chef, Asian Market Kitchen by Roy Yamaguchi is three restaurants in one(like on Seaside) and also Butcher's Cut for steaks.

Like on Seaside, besides the two main restaurants, Golden Sand and Silver Dolphin, there are two buffets, the sea-view Marketplace Buffet with carvery, grill, freshly made  pizza and salad and smaller family buffet, Ocean Point.

The youth area has six spaces, including Baby Club Chicco for children up to 3 and two LEGO-themed clubs, Doremi Studio and Teen Club.

The open-air Forest Aquaventure Park and Jungle Pool, topped by a retractable glass roof are the same spaces as found on Seaside.

The large MSC Yacht Club of 86 deluxe suites, with 24-hour butler service, is located over three floors with a restaurant above the forward-facing lounge, along with a private pool and sun deck with bar.

After her inaugral summer season in the Med, Seaview will go transatlantic to be based out of Brazil for southern hemisphere summer 2018/19, 'following the sun as she was built to do,' said Vago.