A focus on wave, then how Edge newbuilds will follow 'the sexiest ships ever built' 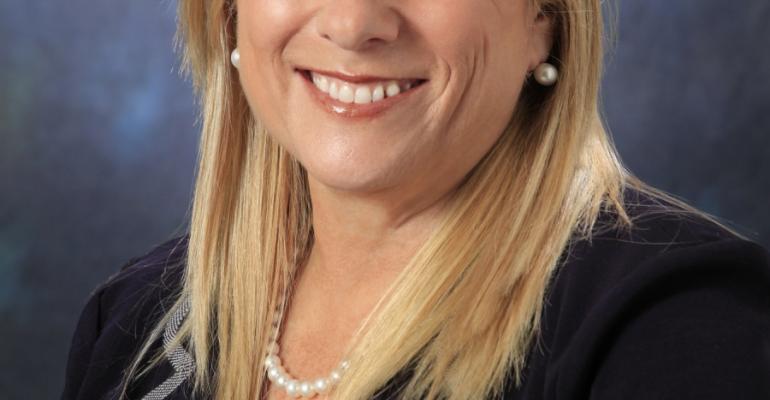 Two months into the Celebrity Cruises presidency, Lisa Lutoff-Perlo—who's also ceo—is focused on making a success of the critical wave season and continuing to strengthen the 'Modern Luxury' brand differentiation. She's also starting to delve into the Edge newbuild platform that follows the Solstice class she called 'widely heralded as the sexiest ships ever built.'

That gives Celebrity the confidence to 'push the edge,' Lutoff-Perlo said, explaining the new platform's name. 'We'll look at elevating the design. We'll continue to evolve to draw more guests to the Modern Luxury experience.'

Meanwhile, her priority is 'to ensure we do really well this year' with strong wave-season sales. She's keeping her eye on the business, and that includes how bookings are coming in for 2016 since Celebrity has been revealing its deployment earlier than ever before.

For example, in mid-December the line opened bookings for the October 2016 to April 2017 Caribbean season, featuring seven ships, double overnights in port and a Mardi Gras theme cruise in February 2017.

As for this year, Lutoff-Perlo hopes consumer confidence will boost demand for vacations. Weather plays a role, too. A cold winter in the US Northeast typically fuels bookings while major storms that shut down cities aren't helpful.

Celebrity is a 'pan-Anglo' brand—besides the core US market, a lot of bookings come from Canada, the UK and Australia. So macroeconomic conditions across a range of countries are relevant, she said.

During Royal Caribbean Cruises Ltd.'s Jan. 29 earnings call, chairman and ceo Richard Fain said Celebrity's Solstice-class ships continue to stand out and drive returns, while the brand's '123go!' promotions, which bundle in a choice of beverage package, gratuities or on-board credit, have been 'very successful.'

Because more inclusive pricing is so well-received, Celebrity has a key team member in a redefined role: vp Susan Bonner is now back with the brand and oversees both ticket and on-board revenue, Lutoff-Perlo said, instead of her previous on-board revenue focus for Royal Caribbean as a whole.

The Celebrity team remains fairly consistent since she was svp hotel operations and responsible for ushering the Solstice ships into service. In August 2012 until last December, she led all operations at RCI, a period highlighted by Quantum of the Seas' arrival.

Lutoff-Perlo has ample experience planning and launching new classes of ships. She also was involved in writing the white paper for what became the Oasis class, and she was instrumental in the Freedom-class execution.

Now she's embarking on the Edge class, which she described as an evolution from Solstice that, in turn, sprang from the Millennium platform.

'The brand believes the Solstice-class size is the sweet spot,' Lutoff-Perlo said. The 2,900-berth Edge vessels are each 984 feet long, 123 feet wide and 190 feet high, which enables them to access a wide range of global destinations.

Edge has not been designed yet. That work is just beginning.

While the Solstice ships were built at Meyer Werft, the Edge newbuilds will be constructed at STX France. Lutoff-Perlo was in sales with RCI when the Saint-Nazaire yard produced the Sovereign-class vessels, and now it's building Oasis 3 and 4. But for Lutoff-Perlo, Edge will be the first chance to work closely with the French team.

The 30-year company veteran has been among the many cruise executives taking new leadership roles in recent months.

'I've never seen such movement,' she said, adding that even so, there's consistency because key figures remain: she, Michael Bayley, Adam Goldstein and Richard Fain are all long-timers. In the Carnival group, Micky Arison and Arnold Donald have tenure, Stein Kruse is still overseeing Holland America and Jan Swartz has many years at Princess. Plus, Christine Duffy is a known figure from her time at Cruise Lines International Association.

'You see some new faces, but it's within the context of a lot of stability,' Lutoff-Perlo summed up. 'It tells me there's a lot of opportunity for growth in this business. It's nice to see. It's a really good blend of internal and external candidates.'

The reaction to women getting leadership roles, though, caught Lutoff-Perlo by surprise.

Until becoming president, she hadn't thought of herself as an inspirational figure.

'I spent my career not thinking about gender but with this most recent move, I really can't ignore it,' she said. The response to her promotion—in general but particularly among women within the company—has been 'overwhelming.'