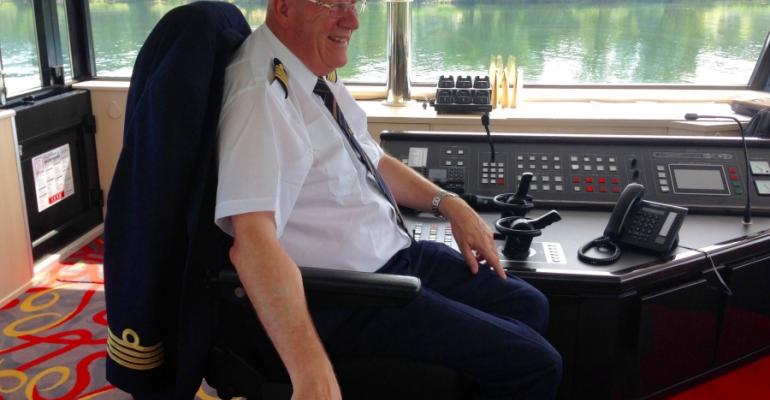 He has been a captain for an incredible 41 years. Jan de Bruijn, who earned his first captain's license at 23, currently serves as the master of AmaWaterways' newest vessel, AmaSerena.

He's surely one of the most seasoned hands on Europe's rivers.

During this period of low water that has forced a number of operators to cancel or revise sailings, AmaSerena has been able to keep its schedule of Danube cruises between Budapest and Vilshofen, Germany.

'Believe it or not, 80% of the whole trip we have one or two feet of water under the ship,' de Bruijn told passengers at the start of AmaSerena's July 29 christening voyage.

Throughout the cruise the tall, robust de Bruijn was highly visible, checking the mooring lines in port, greeting passengers at the gangway, overseeing the crew at work, hosting his captain's table in the restaurant and personally delivering the safety briefing on the first night. Afterward he even handed out red roses to the ladies.

A little later the captain orchestrated a highlight of the cruise—a spin around the Budapest waterfront with its gloriously illuminated bridges, palaces and monuments.

As 'The Blue Danube Waltz' played on AmaSerena's public address system, de Bruijn looked like a symphony conductor up above in the dark, glass-enclosed navigation bridge, his face illuminated by the controls as he deftly maneuvered the vessel along the heavily trafficked river.

Each Ama riverboat is assigned three captains—a first and second captain on board plus a relief captain ashore. They rotate, four weeks on, two weeks off.

De Bruijn pinpointed the most challenging stretch of the Danube as between Vilshofen and Regensburg, where sand banks make yellow water for much of the course.

'Most captains don't like it,' he said, adding that he's sailed it many times.

He reckons he's plied the waterways between Amsterdam and Budapest at least 500 times.

'I know the Main River and Danube Canal very well. I can dream it,' he said.

De Bruijn hails from the Netherlands, where Ama's vessels are assembled after their hulls are built in Belgrade. He lives in picturesque Kinderdijk with its old wooden windmills, and has a daughter, son and five grandchildren.

After starting his mariner's career on the ocean de Bruijn changed course for the rivers and earned his first captain's license in 1.5 years, at 23. Today, he said, some captains are as young as 21.

Since working on different types of vessels de Bruijn has been crisscrossing Europe's rivers on passenger ships for the past 13 years and is in his ninth season with AmaWaterways.

'Next year I can retire. I don't want to,' he told Seatrade Cruise News. He'd like to work through 2017 when he will have been involved in the building and launch of 10 Ama vessels.

'I'm proud to be here. It's a very good company,' de Bruijn said.

AmaSerena's Aug. 4 christening was his fifth riverboat inaugural in Vilshofen—others have been in Regensburg and Vienna. He seemed to get a big kick out of being presented with a Vilshofen banner by the Bavarian bürgermeister and the beer queen in her dirndl and sash.

Of course, de Bruijn was most pleased when the magnum of Champagne broke with a mighty smash against AmaSerena's hull.