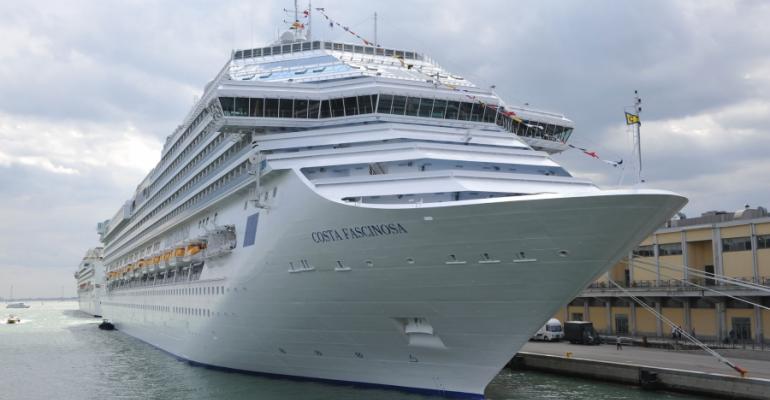 Costa Crociere chief Pier Luigi Foschi called today’s delivery of Costa Fascinosa ‘an important stepping stone on our company’s road to recovery’ and a confirmation that long-term business fundamentals ‘remain strong.’ Despite Costa Concordia’s capsize and the economic downturn, ‘Costa has bounced back and booking volumes are back to the same levels recorded this time last year, ahead of our own expectations,’ Foschi said in Venice during Costa Fascinosa’s official handover from Fincantieri.

‘Our share of the market in the main countries where we operate has not been affected,’ Foschi maintained. ‘We were, are and will remain No. 1 in Europe.’ The Costa chief further pledged: ‘We will continue to work for our customers, offering them even better and safer cruises on fantastic ships like the Costa Fascinosa,’ on a day when the line also detailed seven safety initiatives.

These include implementation of a high-tech safety monitoring system to manage and monitor routes and involving both on-board and ground staff. The system enables the company to monitor the position and course of the entire fleet in real time.

Costa Fascinosa was delivered in a ceremony at the Venice Passenger Terminal, attended by Italy’s Tourism Minister Piero Gnudi, whose daughter Elsa served as godmother of the new ship. Costa and Fincantieri made a joint donation to the Papa Giovanni XXIII Community by Father Oreste Benzi, for the Rainbow Project, which assists children worldwide and is supported by Elsa Gnudi.

The €510m Costa Fascinosa was built at Fincantieri’s Marghera yard.

Fincantieri ceo Giuseppe Bono called the ship ‘living proof of the progress and the results achieved by two great Italian industries jointly contributing to spread a positive image of “Made in Italy” around the world despite the difficulties.’

Costa Fascinosa’s delivery follows, by two months, the completion of the extensive €90m renovation of neoRomantica. Costa also plans to add a 132,500gt ship, built at Marghera, in October 2014.