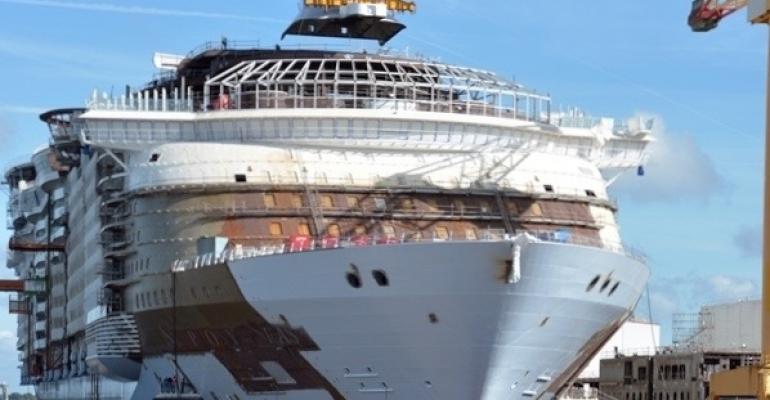 Symphony of the Seas is pictured in Saint-Nazaire at its float-out in June
The French state is exercising its pre-emptive right to acquire the remaining share capital in STX France, buying time to continue negotiations with Italy. This is a temporary move that will cost France about €80m.

The decision follows Italy's rejection of new French terms for the acquisition of the Saint-Nazaire yard that would split the STX France share capital equally between France and Italy and let Fincantieri appoint the president and general manager, giving it operational control. Rome sought at least 51% of the share capital and control of the executive board.

French Economy Minister Bruno Le Maire on Thursday said the sole reason for exercising the pre-emptive right is to 'protect our strategic interests and our unique shipbuilding industry know-how. We will continue to negotiate for the best possible terms with our Italian partners on this basis.'

Le Maire said the intention is not for shipyard to remain in state control and he hopes a solution will be reached in the weeks to come. The minister plans to travel to Rome on Tuesday for talks with Finance Minister Pier Carlo Padoan and Economy Development Minister Carlo Calenda.

In negotiating the sale of STX France following the collapse of South Korean parent STX, the former French government reached a deal where the state would keep its 33.3% stake and veto right, while Italy's Fincantieri got 66.6%. Subsequently Fincantieri agreed to reduce its stake to 48% by selling some shares to an Italian investment consortium, Fondanzione CR Trieste, and French state-controlled naval shipbuilder DCNS was to take a 12% stake.

But in April, new French President Emmanuel Macron announced his administration would renegotiate the deal with Italy, leading to the 50-50 proposal that was rejected at midnight.