Frank talk on rebuilding and resilience in a very vulnerable region 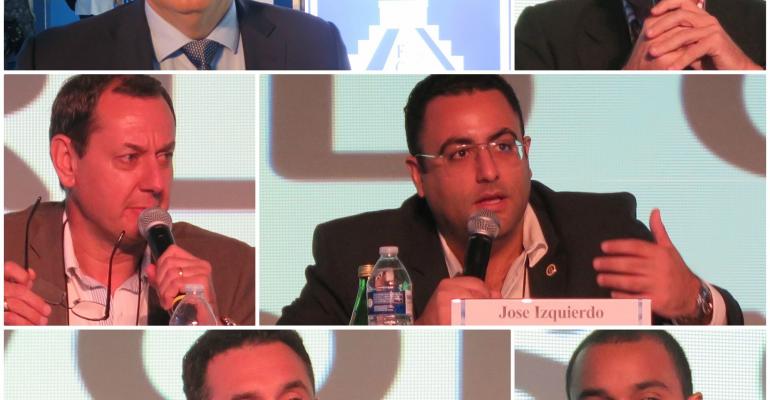 There were encouraging words about post-hurricane resilience at the Florida-Caribbean Cruise Association's annual conference. But as one audience member asked: How can destinations rebuild better than before if they don't have money?

'We have avoided and neglected the obvious for so long. This region is ecologically extremely sensitive and socially very sensitive and financially very vulnerable,' he said. 'We continue thinking there's tomorrow. Tomorrow has arrived.'

All the heroic actions to provide assistance after the storms and all the plans for rebuilding better will 'amount to nothing unless we wake up and realize how big a step the next step is,' Chastanet said in moderating an FCCA session on best practices for crisis management.

It's going to take a heavy investment and commitment, with private sector participation. Money that's been appropriated for recovery just scratches the surface of what's needed.

'Nobody is thinking of the real numbers,' Chastanet said.

In the case of Dominica, known as 'The Nature Island,' how do you put value on a rain forest? the minister asked. For Puerto Rico, already carrying many tens of billions of dollars in debt, the $150m to $200m to restore infrastructure is merely making stop-gap repairs.

France is helping St. Martin and the Netherlands is assisting St. Maarten, but independent countries have no one to come to their aid. Chastanet said Dominica's initial damage estimate equaled 200% of its GDP.

And Britain could not allocate aid to the Virgin Islands and Anguilla because these overseas territories are too wealthy to qualify for assistance under official international criteria.

It's not just the costs of repairs. The Caribbean faces lost revenues, and unimpacted islands will lose remittances from workers with jobs in places that were affected. The agricultural sector is set back, insurance costs will skyrocket and middle class citizens who provide stability and leadership to communities will leave.

Chastanet has appealed to the United Nations, the World Bank and the International Monetary Fund. He's working to decouple the official international criteria for post-disaster financial aid from income level, since some islands—such as BVI and Anguilla—have populations with middle or high incomes.

As far as creating a fund for future crises, 'The bad news is there is not enough public money available,' the prime minister told FCCA attendees.

The Caribbean is vulnerable to climate change and acidity is 'another silent enemy' that's growing, Chastanet warned. 'We need to program for a very different way of life if we're going to make it sustainable.' Meanwhile, 'The lack of investment in the region for the past 15 years is going to come back to haunt us.'

The next hurricane season, he pointed out, is only seven months away.

Also part of the FCCA crisis management panel were representatives of cruise lines and destinations impacted by hurricanes.

They stressed the importance of satellite phones and redundant communications systems, as well as mobile emergency operations centers.

When it comes to communications, media interviews are tricky. Chastanet advised tourism officials to steer clear of tallying the devastation. That doesn't help get aid and should be left to other leaders.

If destinations don't communicate, though, 'social media is going to tell the story,' Brison told FCCA attendees, noting how even big traditional media cited Facebook posts about the storms.

When communicating, 'Be open. Be factual. Be realistic,' he said.

With each hurricane, destinations strive to improve. Following Luis in 1995, it took months for St. Maarten to get power back. Power lines were put underground and this time, electricity was being restored the week after Irma. It's now at 80%, according to Brison. 1999's Hurricane Lenny brought flooding, so that was planned for.

Irma gave Puerto Rico a 'dress rehearsal' for Maria, as José Izquierdo, executive director, Puerto Rico Tourism Co., put it. He stressed the importance of having a communications strategy. In Puerto Rico's case, the tourism company became an emergency management agency, giving content to the messaging.

In addition, staff were dispatched to hotels to take a census of all guests prior to the storms to help facilitate evacuation, and to the airport, where people flocked even if they didn't have flights. Afterward, housing first responders was another task; currently seven hotels are filled with them.

Carlos Torres de Navarra, vp commercial port operations, Carnival Cruise Line, offered a 'road map to normalcy'—what destinations need to prioritize to get ships back. First, the maritime aspect—providing depth charts—is critical, since if ships can't enter the port, there's no point to anything else.

Then destinations need to clear roads to parks and beaches that people visit on excursions or independently, and the port and downtown should get a general cleanup. Security protocols need to be in place. Downed power lines have to be addressed. Be sure food and beverage locations are ready. Have retailers ready. Offer as much of the shore excursions program as possible.

Torres de Navarra said St. Maarten was the first to provide depth charts, very quickly, after Irma. And he commended Key West as a great example of following the road map; it was open to cruise ships just two weeks after the storm.

The Carnival executive also advised all destinations to think about their readiness to take redeployed ships since there could be a windfall of business for those that aren't impacted.

Cruise lines have been very generous in providing relief supplies, but it's hard for ships in service to make room for additional stores since their provisions space is optimized. 'No way can I put even 20 pallets on a ship,' Torres de Navarra said, adding that it's more effective to use a secondary carrier like Tropical Shipping that can load 40 pallets.

As for when to cancel cruises and when to return to impacted destinations, decisions vary.

Disney's Daya pointed out his company also had to batten down its theme parks in Florida and think of thousands of cast members. New DCL president Anthony Connelly quickly decided to cancel several cruises. Though the financial loss was painful, safety was the priority.

Twenty thousand people on the ships could get stranded, Daya said, and hotel rooms in Orlando were already at capacity. By taking the cancellation decision early, Disney was able to get people home and dead-head the ships to a safe zone south of Cuba.

Since the storms, lines have taken different decisions about resuming itineraries.

Carnival is not returning to St. Thomas and St. Maarten until January, though others are going sooner.

'We had to make that hard decision in light of a lot of concerns by our guests,' Torres de Navarra explained, noting that many are asking about the ports' readiness, and it's hard to give answers.

The St. Maarten airport just opened a week ago, and Carnival is sending a team this week to check on shore excursions. Many factors need to be weighed.