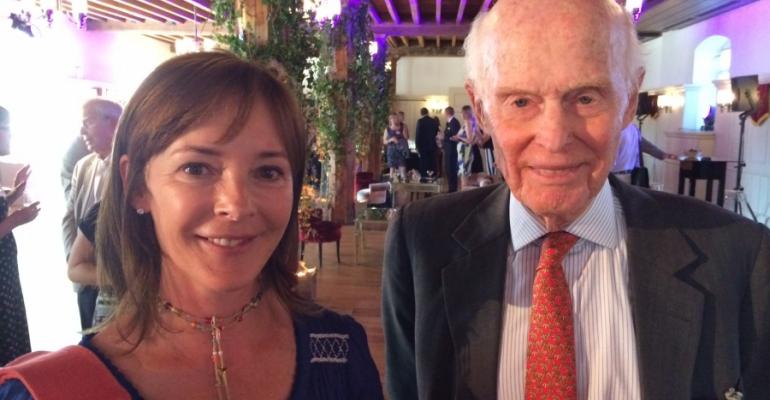 ‘A Date with Death & The Duchess’ is a new cruise itinerary built around mystery and suspense and launched by Fred Olsen Cruise Lines for summer 2015, onboard 880-passenger  Boudicca.

The 16 night Poison, Murder & Mystery Cruise, departing from Rosyth(Edinburgh) on July 10, 2015 is linking the Duchess of Northumberland’s Poison Gardens at Alnwick Castle (which starred as Hogwarts School of Witchcraft & Wizardry in the Harry Potter films) and that of Fred Olsen Senior in Guimar, Tenerife.

Both the Duchess and Olsen Snr, chairman of the Fred Olsen Group, hosted the unveiling to UK travel agents, past passengers and media in the Tower of London Thursday.

This intriguing cruise is the result of a creative collaboration between the Norwegian shipping and energy pioneer and Her Grace the Duchess of Northumberland who both share a passion for horticulture, especially poisonous plants.

Asked by Seatrade Insider who’s poison garden is the best, Olsen Snr replied, ‘they both contain unique species that are specific to their location, as they are in different climates.’

He praised the Duchess for coming up with the idea of a cruise based around the poison garden theme within ‘five seconds of my meeting her’, he exclaimed.

The Duchess said, ‘it took some time for Fred to warm to the idea’, which he acknowledged, but confirmed his full support of the Murder Mystery theme that the team has drawn together.

‘For me, it is very special to be able to link these gardens with a unique cruise itinerary and we know that many guests share an enthusiasm for gardening. We also know, from previous experiences such as our Titanic Centenary cruise in April 2012, that they enjoy dressing up and taking part in themed events,’ noted Olsen Snr.

Fred Olsen's first mystery cruise, a 14 night sailing on Black Watch from Tilbury on November 15, 2014 including two murder mystery dinners and an undisclosed itinerary, is sold out.

Comparing the large 4,000+ passenger cruise ships with his brand’s more initimate style of cruising 85-year old Olsen Snr said, ‘ours is a different form of cruising, it’s not just about glamour it’s about an overall experience and one to remember,’ he remarked.

‘As well as hosting the largest participative ‘murder mystery’ event ever held on a cruise ship – which will be officially witnessed onboard by Guiness World Records – the Duchess will join the ship for part of the sailing, along with Olsen Snr, it is hoped,’ revealed Nathan Philpot, sales and mareting director Fred Olsen Cruise Lines.

Guests have the opportunity, if they wish, to immerse themselves in the whole experience by picking one of 12 1920’s characters ahead of the cruise and dressing up as their chosen persona and joining in with the travelling players (provided by Peel Entertainment Group)as they reveal clues and checking for evidence throughout the voyage.

The subject of poison and mystery will run through the cruise with plays, talks and special shorex and a murder mystery as soon as guests get onboard. Philpot disclosed the line is presenting a World Cruise for two people at a Grand Finale at Alnwick Castle to the winner who solves the murder.

The shorex programme includes a guided tour of Alnwick Castle and the Poison Gardens followed by dinner and a Murder Mystery show, a presentation of the creation of the gardens by the Duchess and a day tour of the Pyramids of Guimar in Tenerife, including Olsen Senior’s Poison Garden and an outdoor performance of A Midsummer Night’s Dream in the grounds. Prices start at £2,499 per person.

Guests speakers onboard include Felix Francis, son of thriller-writer Dick Francis who will pen a short crime story on board, Peter Dean former forensic medical examiner with the Metropolitan Police and Dr Mark Siddall, curator of the Power of Poison exhibition at The American Museum of Natural History.