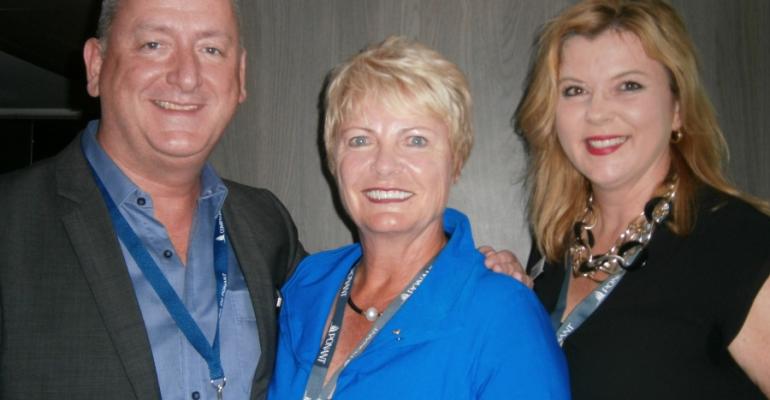 Sarina Bratton (centre) with Steve McLaughlin, director of sales Australasia, and Monique Ponfoort, vp Australasia, at Saturday's dinner on board L'Austral in Sydney

Ponant Yacht Cruises & Expeditions is making its maiden visit to Sydney with the 264-passenger L’Austral which called at Darwin in 2012.

Flying the tricolour from the stern the luxury megayacht, which entered service in May 2011 and has a crew of 140, arrived at the White Bay Cruise Terminal Saturday morning from Cairns via Townsville, Hamilton Island, Percy Island and Newcastle.

Saturday night she repositioned to Athol Buoy in front of Taronga Zoo and on Sunday night is due to sail for Melbourne via Eden, Flinders Island, Wineglass Bay and Maria Island.

She will then operate three cruises between Melbourne and New Zealand before departing Auckland on February 15 on a repositioning voyage to Hong Kong via Darwin. After a series of China/Japan voyages she will sail to Vancouver for a season in Alaska.

Australasia chairman Sarina Bratton, who hosted a dinner for top cruise sellers and media representatives, said the company’s 2017 itineraries will be launched mid-2015.

Bratton, who is also special adviser to Ponant’s Marseille-based executive team, declined to give specific details about the new programme but said ‘there will be a ship in this region.’