French market is a top priority for MSC Cruises 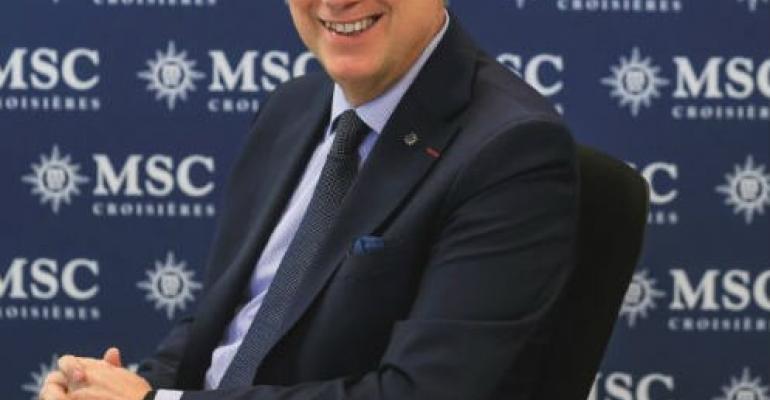 MSC Cruises' Patrick Pourbaix, gm for France, Belgium and Luxembourg, sees huge potential in local source markets
MSC Cruises’ Paris-based general manager Patrick Pourbaix has been set a challenge: to almost triple passengers to more than half a million a year by 2026 and make it the leader in the French market.

Pourbaix, heading up MSC Cruises in France, Belgium and Luxembourg, is enthusiastic about the local source market potential.

Among the factors which account for these positive results is no doubt the awareness of the brand generated by many newbuilds and various launches and ceremonies held at Chantiers de l’Atlantique (ex-STX) in Saint-Nazaire, all widely covered by the local media.

By 2026, 21 of the MSC Cruises’ fleet will have been built in France and only four in Italy.

Important also for Pourbaix, is to bring on board what the French like: ‘We wanted to add a “French touch”, which is also appreciated by an international clientele,’ he said.

‘For gastronomy, we have a partnership on MSC Meraviglia with Jean-Philippe Maury, a French award-winning pastry chef quite well known in the US.

‘Genuine “Bistrots” are to be found on MSC’s Grandiosa, Bellissima, Seaside and Seaview and we are searching for a partnership with a renowned French chef to reinforce our high-end offer,’ he remarked.

The bakery on board the whole fleet includes typical butter croissants, pains au chocolat and baguettes.

In addition, the hairdresser salons are under the aegis of Jean-Louis David, a big-name brand in France, ‘and it works very well’, adds Pourbaix.

So does the partnership entered into with Air France until 2020 for fly cruising to all destinations and the increased number of calls in Marseille in 2019, which is MSC’s main hub in France, he added.

For Pourbaix, ‘This has been MSC’s ambition since the beginning. We want to define an affordable product, with a real savoir-faire, and a premium positioning accessible to as many passengers as possible.

‘As our ships grow in size and offer more space, it allows more upscale software in terms of entertainment and services: for example, on our new ships, we have a Champagne Bar.

'The Meraviglia class offers the Cirque du Soleil at Sea, with shows performed six nights a week, created exclusively for MSC Cruises and held in a dedicated 1,000sq mtr space available also for dinner and drinks. This premium approach is something the French like and which makes our success here, even if we are slightly more expensive than our competitor,’ he added.

The refinement and exclusive services offered in the MSC Yacht Club are also appreciated by the French: ‘With a 20% fill rate, we are the top producing source market,' Pourbaix commented.

The French also rank as the top nationality for bookings on the company’s next world cruise: ‘It is a purely French phenomenon,’ says Pourbaix.

‘In January 2019, some 750 French passengers will sail from Marseille, making it the leading nationality and reservations from here for the second world cruise on MSC Magnifica in January 2020 are already running almost equivalent,’ he concluded.