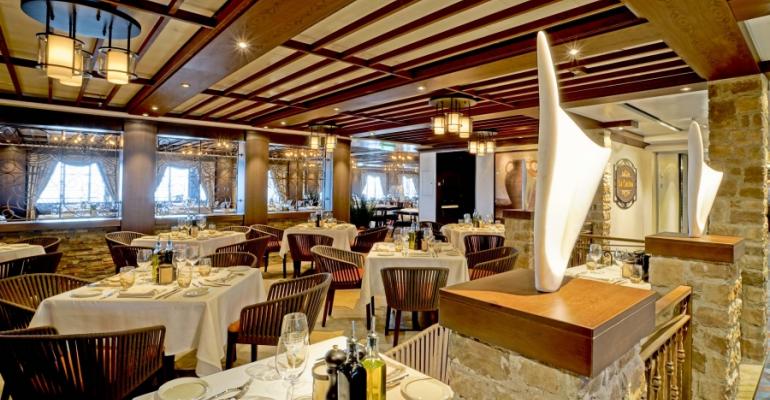 Norwegian Escape is being called a foodie ship, thanks to original offerings from new partners and a little help from Norwegian Cruise Line's sister brand, Oceania Cruises.

'Food Republic is the best food I've had on a cruise ship,' Dan Myers, senior eat/dine editor, The Daily Meal, told Seatrade Cruise News. He cited 'the level of flavors they were able to ratchet up using fish sauce and miso.'

'Food Republic is very memorable, and The District [Brew House],' agreed Libbie Rice, co-president of Ensemble Travel Group. The latter, a gastropub, 'really doesn't feel like a cruise ship.' The floor is industrial and gritty, lending an urban quality to the surroundings where 24 draft beers and 50 bottled beers are served with Food Republic small plates.

Fee thinks foodies will be pleased, while less sophisticated diners can get exposed to more adventurous tastes in a comfortable environment.

'Dining is an area where we're focusing a lot of attention. There's a lot of learning from the Oceania team,' Norwegian Cruise Line president Andy Stuart confirmed.

In addition to the new partnerships, there's a new menu in every venue. La Cucina, particularly, is a 'completely new experience ... Now it's a really quality Italian restaurant,' Stuart said.

Among the venues with outdoor seating along The Waterfront, Food Republic is 'very different, very contemporary,' according to Stuart. It's a fast-paced spot where patrons order by iPad. There's no appetizer, entree, dessert routine. Instead, it's a family-style, share-with-friends concept.

Some of the food and beverage spaces on Norwegian Escape are interrelated. For example, small plates from Food Republic, such as Korean chicken wings and lobster roll, are on the gastropub menu of The District Brew House, while tapas from Pincho Tapas Bar can be ordered in The Cellars, a Michael Mondavi Family Wine Bar.

The casual Jimmy Buffet's Margaritaville has been another popular spot. Waits of an hour or longer at lunch were common during the inaugural sailings.

One New York-based food writer who bagged a spot praised the fish tacos as 'crunchy and batter fried, surprisingly not oily,' with a side of 'very crispy slaw.' From the selection of 10 margaritas, she chose a classic ($10.95) and deemed it pleasantly potent.

Plus, there's the new Supper Club that presents 1980s music and John Hughes films in 'For The Record: The Brat Pack.'

And inside the expanded The Haven—with 95 suites, up from 62 on Norwegian Getaway and Norwegian Breakaway—besides the private lounge and restaurant, new on Norwegian Escape is an alfresco dining area.