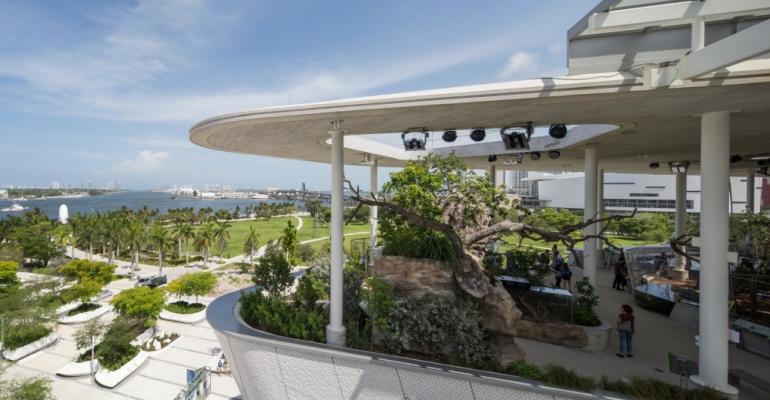 The newly named Royal Caribbean Vista at Miami's Frost Museum of Science
From the top level of the Phillip and Patricia Frost Museum of Science in downtown Miami, the cruise terminals on Dodge Island and the headquarters of Royal Caribbean Cruises Ltd. are clearly visible. So it was fitting that this venue, the Vista, was the site of RCL’s annual media kickoff to Seatrade Cruise Global.

But beyond that the evening marked the opening of what is now called the Royal Caribbean Vista, an open-air display of species indigenous to southern Florida, following the cruise giant's $1.2m gift to the museum.

Besides the lifelike aquarium settings for fish, small aligators and stingrays, the floor also includes an aviary where injured birds are nursed back to health.

'Our business thrives when our community thrives,' RCL chairman and CEO Richard Fain said in remarks to the guests. He indicated additional cooperation with the museum would be forthcoming before describing exciting developments at RCL, including Symphony of the Seas' impending delivery from STX France, to be followed, in the autumn, by the handover of Celebrity Edge, also from the Saint-Nazaire yard.

Fain also said RCL is on track to have a terrific year.

Frank Steslow, president and CEO of the Phillip and Patricia Frost Museum of Science, thanked RCL for its support.

The evening, attended by numerous RCL executives including Adam Goldstein, president and COO, who mingled with media, featured paella at one station and Asian fusion dishes at another, with music by a Latin-themed trio.