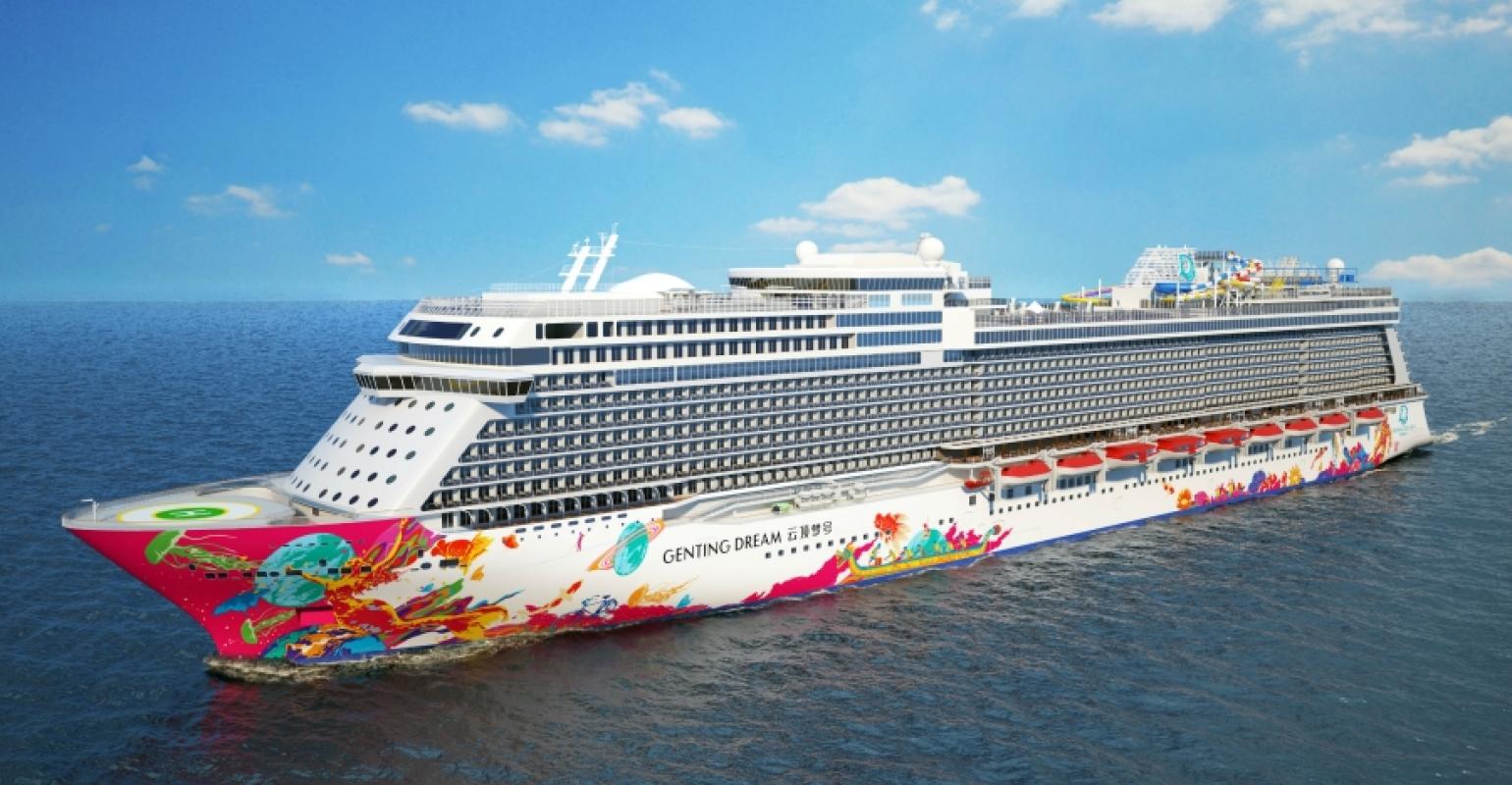 Poolside fashion shows, fireworks mid-ocean, the first Zouk nightclub at sea, 1,100sq mtr of ‘retail-tainment’ and colourful hull artwork are just some of the features to be found on Genting Dream revealed by senior Genting Hong Kong executives today in Singapore ahead of the arrival of Dream Cruises' first newbuild later this year.

Thatcher Brown, president of Dream Cruises, said the cruise line aims to be 'Asian at heart, international in spirit' and described how the brand will cater to the large and rapidly growing premium market in Asia. 'It is the vision of Genting Hong Kong chairman Tan Sri Lim Kok Thay who saw an opportunity gap in the market place and decided to build two cruise ships,' he recounted.

To meet Asian guest expectations 151,000gt Genting Dream will feature a kaleidoscope of cuisine, colour and activity. 85% of the cuisine on board will be Asian. 35 restaurant and bar concepts will stretch in half a kilometre of a wraparound promenade featuring sea-side dining and lounging from sunrise-to-sunset. From Sushi bars and tepanyaki to an English-style pub, a Whisky bar and Raw bar concept, there should be something for every taste.

'It is our mission to transpose the legendary six-star service standards of Crystal Cruises and to customize them to serve the fast growing Chinese market and all our Asian guests,' said Brown. 'All front line staff will be able to speak Putonghua, along with English, as the secondary language onboard.'

Genting Dream, the first of two newbuilds, is currently undergoing fit-out at Meyer Werft in Germany and will arrive in Singapore on November 4,2016.

A two-night cruise priced from S$561 will kick-start the Singaore program, followed by a 6-night cruise from Singapore to Hong Kong and the Pearl River Delta with stops in Ho Chi Minh City, Nha Trang and Da Nang.

The maiden itinerary from homeport of Guangzhou (Nansha Port), China starts on November 13 and covers 2, 5 and 7-night cruises to Vietnam. 7 night cruises are priced upwards of S$1,500.

The above itineraries went on sale to individual consumers today and the company expects 85% of cruisers to be Asians. Goh speculated that the remaining 15% could come from Australia, which has a growing cruise appetite.

Loh told Seatrade Cruise News that so far the support has been very good from incentive groups, including a booking from a wedding party. He expects passengers from Singapore, Indonesia, Thailand, Philippines and Taiwan to sail out of Singapore.

He also predicts some 60% of Genting Dream's sailings out of Guangzhou could comprise passengers from China. He added that Guangzhou (Nasha) homeporting offers easy access. Genting is working with port authorities there to develop this as a homeport, like it has previously done with other cruise bases in the region, including Singapore.

The 335mtr long vessel can accommodate some 3,352 passengers and will be staffed by 2,000 crew, which according to Brown translates into 'the leading crew-to-guest ratio in Asia-based cruising'.

It will have 18 decks with 1,674 staterooms,  70% of which will have private balconies, and 100 connecting rooms to ensure convenience for family and larger group vacations. Guests also can experience European-style butler service and special guest privileges.

The 224 sq mtr villas or Dream Suites, priced at about S$4,900 Brown said will be among 'the largest villas at sea in Asia'. Villa guests will have access to a fully-catered private pool deck and Genting Club restaurant where chefs can create bespoke meals.

Brown said the vessel has been designed with 23 years of Genting experience and 'how we animate the spaces with brilliant service will be important.'

The Dream Tourism Academy in Suzhou has trained some 100 Chinese hires for the vessel. Some 15 trainers have helped equip them with a range
of necessary skills from English to safety, and even a little ballet to encourage graceful movements, according to Peter Foster, svp hotel operations.

Currently staff, including butlers, are undergoing training on board other Genting vessels.

Entertaining Asians at sea is a major preoccupation. One highlight is the first Zouk at sea, developed from the iconic Singapore night spot and famed beach parties.

There will also high-end fashion shows at the poolside and the first fireworks at sea whilst the vessel is in the middle of the ocean.

While there will be an international spa, rituals will feature authentic Asian services such as reflexology. Yoga and Tai Chi classes will also be available
onboard. A central feature will be 1,100sq mtr of ‘retail-tainment’ with a wide array of leading luxury brands in retail shops. There will be a dedicated
personal shopper concierge.

The hull of the vessel boasts one of the 'largest floating art pieces' by Shanghai-born, London-based pop artist, Jacky Tsai. His creation 'East meets-West’ is entitled 'Voyage of a Lover’s Dream' depicting 'an ethereal and fantastical journey of love between a mermaid and an astronaut'.

Brown explained, 'our purpose is to bring dreams to life and for guests to literally immerse themselves in the Genting Dream experience, there will be two unique "Submersibles" or miniature submarine limousines which take guests under the sea for a 45 minute guided tour.'

The second ship World Dream will be completed in November 2017. Brown said it had not committed to deployments for this ship yet but his
inclination is 'to think broadly'. He said the brand would learn from its first ship experience and may wish to 'explore homeports' for the second arrival.