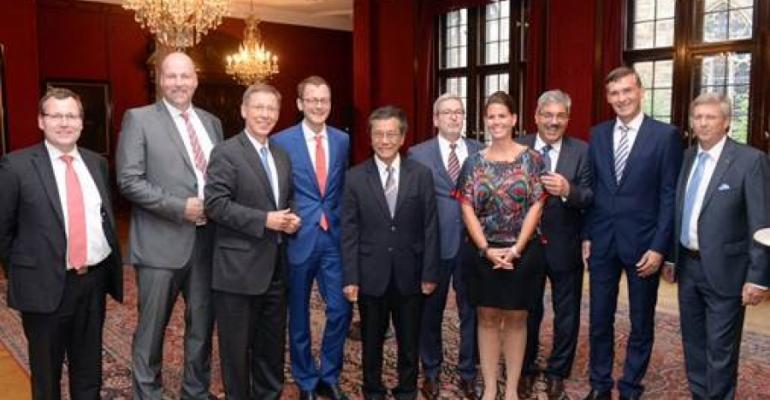 Tan Sri Lim Kok Thay, chairman Genting HK (centre), with Carsten Sieling, president of the Senate and mayor of Bremen (third from left) with other dignataries at Bremen Town Hall

It's official: Genting Hong Kong has entered into an agreement to acquire shipbuilder Lloyd Werft Bremerhaven in a deal that will see the company invest €17.5m for a 50% ownership of the land and 70% of the newbuild business. This will facilitate the construction of ships for Genting affiliate Crystal Cruises.

The acquisition, announced today at Bremen Town Hall, is subject to the fulfillment of certain final purchase conditions.

Noting Lloyd Werft has built and lengthened six of the ships owned by an affiliate of the company (Norwegian Cruise Line), Genting HK chairman Tan Sri KT Lim said the yard has the expertise to produce a series of world-class ships for Crystal.

Lloyd Werft board members Rüdiger Pallentin, Carsten J. Haake and Dirk Petersjohann expressed appreciation for Genting’s decision to acquire the yard and their plans to build for Crystal.

'We will use all of our experience and know-how to serve Genting as their loyal and competent partner in building the cruise ships for Crystal Cruises. We are proud to become a family member of Genting Hong Kong,' Pallentin said.

In order to build the Crystal ships, a considerable investment program needs to be carried out on the yard premises.

On July 19 Genting HK announced plans for a trio of large (100,000gt-plus) luxury expedition vessels at Lloyd Werft, each carrying about 1,000 passengers, with the first delivery in late 2018. Also, a pair of river newbuilds were announced, to begin sailing in spring 2017. Details on these ships and the delivery schedule were not elaborated today.

'This is a fantastic day for Lloyd Werft, its staff, partner firms and for the whole region, as with Genting as a shareholder and with its affiliate Crystal as our designated client for building cruise ships and river cruise vessels, the future of our shipyard looks very positive and promising,' Haake said.

Crystal president and ceo Edie Rodriguez welcomed the news in light of the 'great anticipation for Crystal River Cruises and Crystal Exclusive Class ocean vessels' that will 'contribute mightily' to the brand's expansion.

The yard is situated on 260,000 square meters comprising six docks and a 1,600-meter pier. Cruise newbuilds have included Norwegian Cruise Line's Pride of America (whose hull was constructed in the US), Norwegian Sky and Norwegian Sun. Lloyd Werft has also completed cruise refurbishments and conversions such as Cunard Line's Queen Elizabeth 2.

The yard dates back to 1857. It initially focused on general ship repairs, and moved into the conversion and newbuilding businesses in the 1970s.