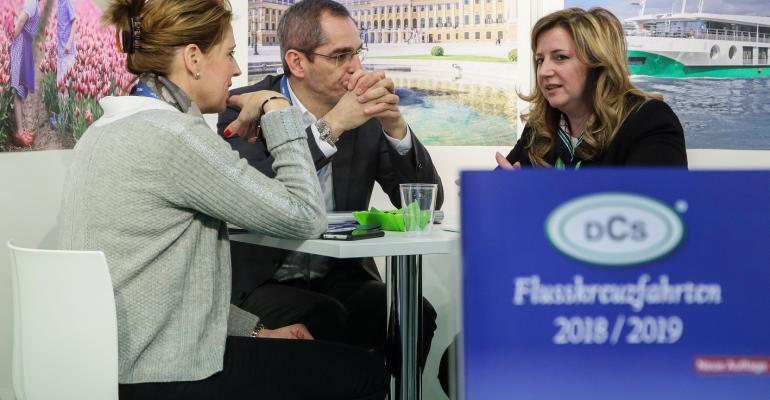 River-cruise companies exhibiting at ITB Berlin reported very good bookings for the 2018 season, heralding another strong year for the market

German passengers were the main drivers of growth for Europe's river cruise industry in 2017, following years of only modest gains. However, Germany still trailed the combined US/Canadian source market.

German demand for river cruising grew by 8% year over year, IG RiverCruise and the German Travel Association (DRV) revealed at the ITB Travel Trade Fair in Berlin. This sets a new German passenger record, besting the prior high in 2011.

Despite last year's German market boom, the US and Canada remain the most important source region for European river cruises, accounting for a 38% passenger share in 2017. Germany followed with a 27.9% share, 3.1 points above the 2016 figure. The UK and Ireland remain the third source market, with an 11.2% share last year.

The majority (61%) of the river cruises sold in Germany last year were seven nights. Four-night cruises followed, with a 16.3% share, followed by two-week itineraries (13.6%). Compared to a decade ago, the average river cruise sold in Germany is one night shorter. Last year 3.2m river-cruise nights were sold, up 6.9%, but still below the record 3.5m nights in 2011.

Germans gravitated to the premium and luxury segment last year, which grew 11.8%, higher than the overall market growth. For the first time, more premium than standard river cruises were sold: 39.4%, compared to 35.8%. The budget sector increased modestly, to 18.5%.

The only cloud on Germany's river-cruise scene is that passengers are aging: 60% are older than 66, while only every seventh German river cruiser is younger than 55.

Somewhat alarmingly, the number of passengers 41 to 65 fell 9.9% year over year. That means attracting younger customers—probably including families—will remain a key challenge for the industry.

Short-term, however, IG RiverCruise and DRV are optimistic the industry will keep its tailwind in 2018. Bookings recorded on the German market so far are very promising, as river-cruise operators exhibiting at ITB Berlin confirmed.

However, 2018's record-low capacity growth points to very strong capacity utilization in 2018. In the medium term, more vessels will be needed to avoid capacity shortages. Several operators, including German ones, are planning new or extensively restyled ships to be inaugurated from 2019.