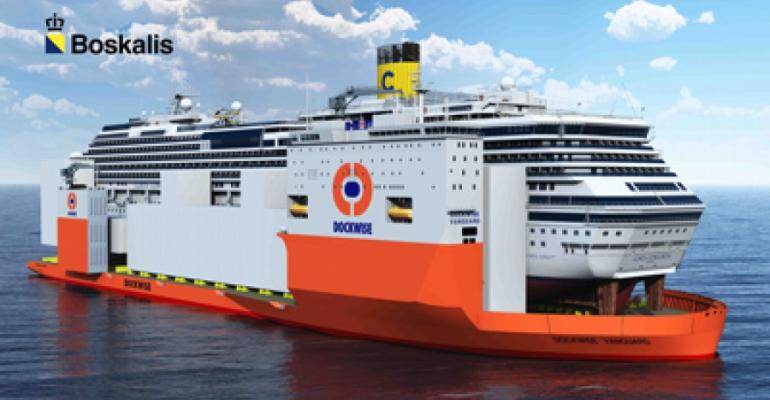 Costa Crociere has secured the availability of a heavy lift ship that could raise Costa Concordia once it has been refloated and carry it to a location for breaking. Lifting the wreck, instead of towing it, provides one of the possible options for removal, Costa said.

The operation would take place at around mid-2014 and the business is valued at approximately $30m, Boskalis said. Where the wreck will be towed for breaking has not been decided.

Dockwise Vanguard was designed to transport offshore oil and gas structures but can carry other vessels or act as an offshore drydock. It has an open, flat stern and bow-less deck measuring 275 meters by 70 meters that enable the vessel to transport cargo longer and wider than the deck dimensions. When the ballast tanks are flooded, the Dockwise Vanguard’s deck is submerged, enabling it to handle deep draft cargo.

Once Dockwise Vanguard is semi-submersed, the refloated Costa Concordia could be brought into position above the deck and as the ballast tanks are emptied, the entire ship, including Concordia, would raise above the water line so the cargo could be transported safely and quickly, Costa said.

Certain modifications would need to be made to Dockwise Vanguard to accommodate the wreck's loading in its current state.

The Dockwise Vanguard presents an alternative to towing.

Costa said it can also offer advantages in terms of discharge methods: when the destination is reached, the wreck could be floated off into the water or skidded off directly onto a pier or quayside.

'As we’ve always stated since the beginning of project, Costa’s goal is to remove the Concordia wreck from Giglio in a safe and swift way and to do this we have always taken into consideration all the possible alternatives and state-of-the art technologies,' said Costa project manager Franco Porcellacchia.

Boskalis already has experience with the Costa Concordia salvage. Its subsidiary SMIT Salvage provided emergency response services in the first months following the grounding. SMIT Salvage and its local partner, Tito Neri, removed the bunker fuel from the ship and acted as caretaker from mid-January to mid-March 2012.