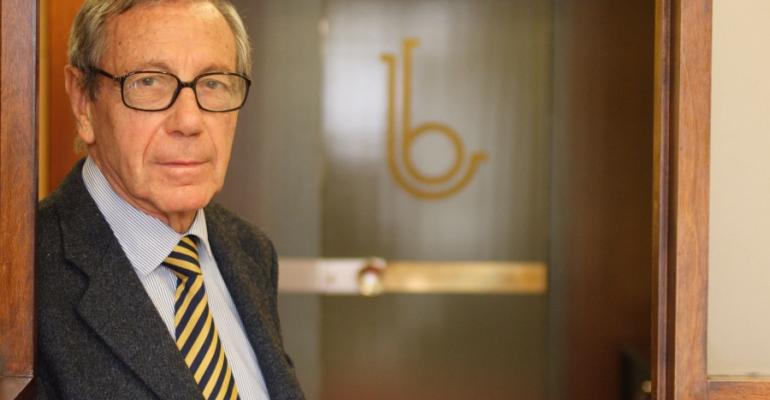 Giuseppe De Jorio designed over 200 cruise ships, ferries and yachts
It is with sadness that Seatrade Cruise News learns of the passing away aged 86, of Italian architect and interior ship designer, Giuseppe De Jorio. He died on February 4 in Genoa.

In a 60 year career, De Jurio left his thumb print on the interiors of 220 cruise ships, ferries and large yachts.

He worked as a trusted consultant advising and designing the vessel interiors for many leading shipowners including Achille Lauro, Nicola Costa, Aldo Grimaldi and Gianluigi Aponte, as well as Adnan Kashoggi and Prince Ranieri of Monaco.

A native of Naples, after a period as an urban architect in Rome where he followed his father Vittorio, he moved to Genoa and set up a principal design office which remains De Jorio Design International’s headquarters today.

From his Genoese office, sided in the last two decades by his sons Marco and Vittorio, Giuseppe signed  off - ‘as background music’ as he liked to call it, most of the company’s designs until a recent illness permitted him from working.

The polyhedral man liked to describe himself as a ‘ship’s city planner architect’ as he treated the ship as a reiteration of a town at sea, with all the issues regarding traffic flows and open spaces.

He began working on the interior design of passenger ships in the early 60s and was a consultant among others for Lauro Lines, British Railways, Trans Méediterrané de Navigation and the Canguri company.

From 1978 to 1994, De Jorio Design was the leading consultant for the Costa Crociere group, until the takeover by Carnival. A notable project was Costa Riviera, which was considered a watershed between two different generations of marine design.

In the same period, De Jorio was also involved in the design of ferries and yachts being built both in Italy and abroad. In 1975, Giuseppe De Jorio received the prestigious Lloyd’s Trophy for the design of Mohamedia, a 48mtr luxury yacht built for the Saudi Arabian businessman Adnan Khashoggi.

He was also responsible for the design of four high-speed, new generation cruise ferries built by Fincantieri for the Greek company Minoan Lines, whilst also designing ferries for Tirrenia and Grimaldi.

De Jorio was commissioned by Aponte, owner of the Mediterranean Shipping Company, for the design of the two sister ships MSC Lirica and MSC Opera, which were respectively delivered in 2003 and 2004 at Chantiers de l’Atlantique, today STX France’s Saint Nazaire yard.

From then on De Jorio’s studio designed almost all MSC Cruises’ ships, including the latest MSC Meraviglia prototype, also being built at STX France, and Fincantieri’s Seaside prototype at Molfalcone.

The eclectic architect was also chosen by the Italian Navy and Fincantieri to design the public areas of the flagship aircraft carrier Cavour, launched in 2004.