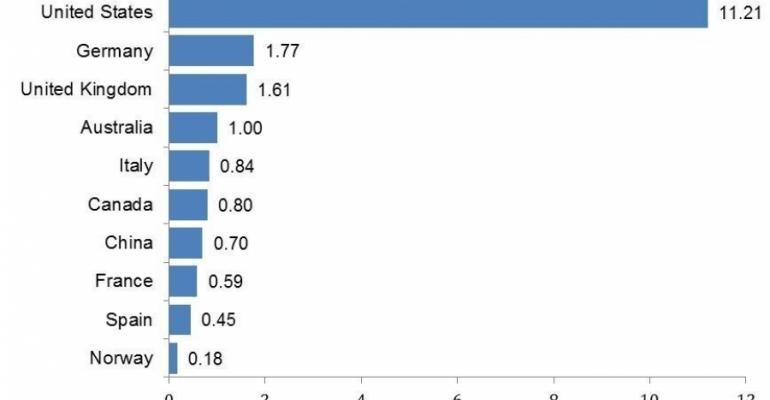 CLIA's Top 10 source markets chart shows how Germany surpassed the UK last year for the first time and that Australia hit 1m cruisers, but leaves out Brazil, which has been one of the larger national markets in recent years (Infographic: CLIA)
Global cruise demand reached 22.04m in 2014, a 3.4% increase over 2013, while cruise-related expenditures generated $119.9bn in total output, up from $117bn, according to a new Cruise Lines International Association study.

The passenger count has ballooned 68% in a decade. In 2004, 13.14m people took ocean cruises. Further growth is projected. Earlier this year CLIA forecast more than 23m people would cruise globally in 2015.

Last year the US generated 11.21m sea-going vacationers, followed by Germany (1.77m), the UK (1.61m) and Australia (1m). As earlier reported here, 2014 was the first year when Germany surpassed the UK as a source market, and when Australia reached 1m passengers.

North America accounted for 55% or 12.2m cruisers. Europe had a 29% share, or 6.4m. Other regions of the world, including Australia, China, Singapore, Japan and South America, made up the remaining 16%, or 3.5m.

Not surprisingly CLIA remarked on China as a driver of growth in Asia, where the business is bounding ahead at double-digit rates.

'The cruise industry is bringing more cruise visits to Asia and the volume of cruise travelers sourced from Asia for cruise tourism worldwide nearly doubled since 2012,' said Cindy D'Aoust, acting ceo of CLIA.

According to the association, between 2013 and 2015, the number of ships deployed in Asia grew at a 10% compound annual growth rate, and the volume of cruises and voyages within and through Asia increased 11%. Passenger capacity in the region increased 20%.

CLIA also announced that cruise-related spending in the US reached a record $21bn in 2014, while the industry's impact on the US economy totaled $46.09bn.