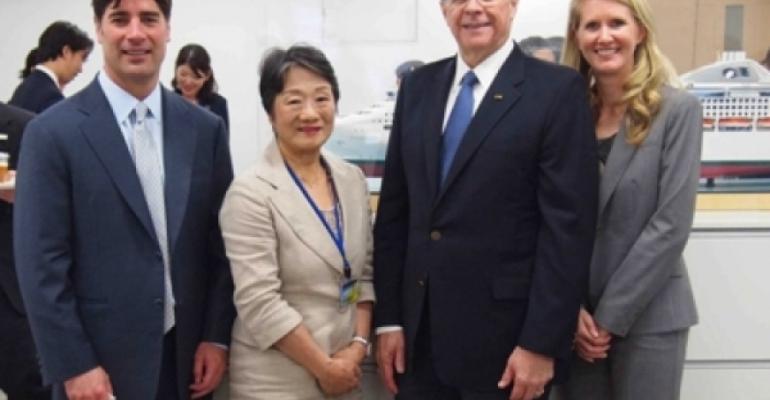 'We are so grateful to have had such a strong, dedicated and experienced professional leader as Kijima-san. As the "godmother" of the Japan cruising industry, she has not only led the growth of Princess Cruises in Japan, but also the rapid development of the cruise vacation industry,' Princess president Jan Swartz said.

Kijima led the Carnival Japan team to launch the first Japan homeport season for Princess in 2013. That business continues today with the largest deployment ever and high customer satisfaction.

Kijima was the general manager of Cruise Vacations in 1992 and worked as a general sales agent for Princess Cruises, P&O Cruises and American Hawaii Cruises, among other lines. In 1994, she became president and expanded the business to become the GSA for Hapag-Lloyd Cruises, Paul Gauguin Cruises, Cunard Line and Seabourn. She also has been a board member of the Japan Association of Travel Agents, and has served as an executive officer since 2005. Kijima became president of Carnival Japan in March 2012 when Cruise Vacations became a part of Carnival plc.

'We will miss Kijima and all she offered to the company,' Swartz said. 'Kijima-san is synonymous with the cruise industry in Japan and she should be proud of all she has accomplished throughout her illustrious career.'

Kijima said she is 'very grateful to have spent nearly 40 years being a part of the growth of the cruising industry in Japan' and called it a deep honor to have led the 'great and passionate' Carnival Japan team since 2012.

'I am very proud of what my teams have accomplished together and by bringing the concept of international cruising to the people of Japan. Although cruising is still a new vacation concept to the Japanese market, I am proud to have laid the foundation for the cruise industry to grow in Japan, and I am sure cruising will become a mainstream vacation choice for travelers looking for one of the best vacations of their lives,' Kijima added.

Swartz welcomed Horikawa as the new country director of Carnival Japan. He joined the company in July 2014, overseeing sales, marketing and public relations operations, and taking on additional roles since joining. His responsibilities include all regions within Japan for Princess, as well as Cunard and Seabourn.

Horikawa has more than 20 years of experience in the retail and leisure industries with significant expertise working with the travel trade in Japan. Prior to joining Carnival Japan he was vp sales and marketing, DFS Group, with responsibility for the DFS duty-free business in the US and Hawaii.

Horikawa also served as gm of the Okinawa division of a global real estate private equity business with the responsibility for managing that company’s assets in Okinawa, which included a hotel and condominium project, a duty-free retail facility and a golf course.