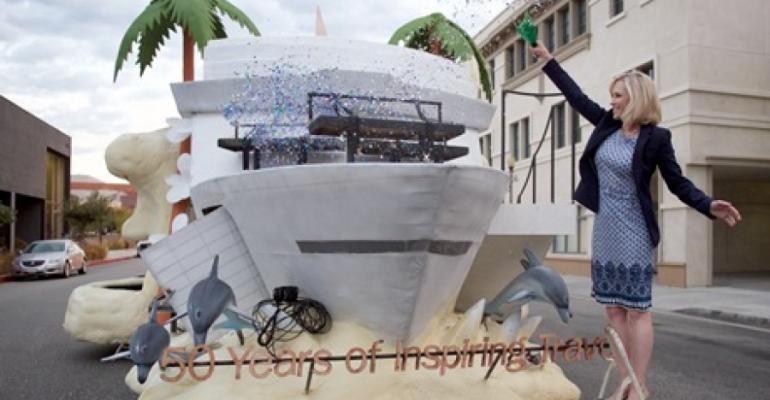 'I name this float Regal Princess. May God bless her and all who cruise down Colorado Boulevard on her' - Julie Benson

Princess Cruises broke a confetti-filled champagne bottle against the bow of its first Rose Parade float before it 'cruised' on a test run in front of the Pasadena headquarters of Phoenix Decorating Co., the float's builder.

Serving as the float's godmother, Julie Benson, vp public relations for Princess, pronounced: 'I name this float Regal Princess. May God bless her and all who cruise down Colorado Boulevard on her.'

Depicting the cruise line’s newest ship, Regal Princess, symbolically sailing through some of the world’s fascinating destinations and landmarks, the Rose Parade float will pay tribute to 'The Love Boat' television show that made Princess one of the most famous names in cruising and kick off a year of 50th anniversary celebrations in 2015. As a special feature, the six original cast members of 'The Love Boat' will ride on the float’s bow.

The float will be 60 feet long and 24 feet high, and will be decorated with more than 24,000 thousand flowers and natural materials.

The Rose Parade has been a tradition since 1890 and is broadcast to approximately 80m viewers around the world every New Year’s Day.