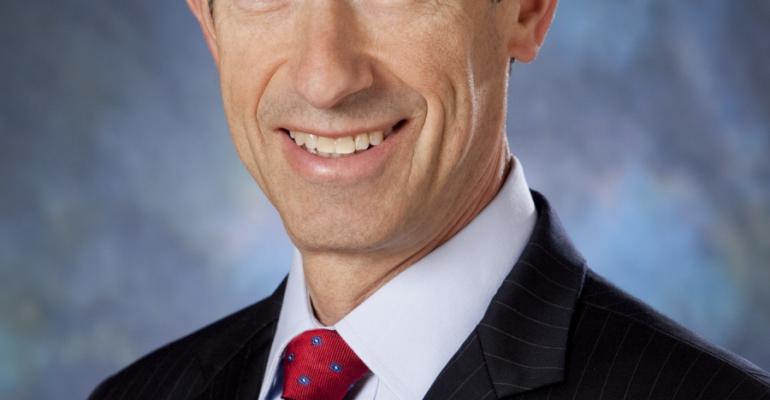 Adam Goldstein stepped into an unexpectedly public role as new chairman of Cruise Lines International Association with the search for a successor to president and ceo Christine Duffy likely to stretch months.

When Goldstein succeeded Carnival Corp. & plc's Howard Frank as CLIA chairman, no one knew Duffy would be leaving to become president of Carnival Cruise Line.

'I thought Christine and I would be working very closely for the next two years. Life is full of surprises,' said Goldstein, president and chief operating officer of Royal Caribbean Cruises Ltd. The search for her successor tops his CLIA tasks, and meanwhile Goldstein is taking on additional duties as spokesperson for the association.

It could take the first half of 2015 before Duffy's replacement is in place, and that will be a challenge for all her staff and the volunteer leadership, Goldstein noted.

'We need to get the right person. We need to take the time it requires to do that,' he told Seatrade Insider.

'We've come a very long way in the four years of Christine as leader. It's a global organization, much more proactive. It has an industry-wide platform on safety issues, many we've taken to IMO [that have become regulation]. We're very far down the field from when she took the job in 2011.'

Goldstein pointed to progress in international areas and noted CLIA is present and active in Europe, Brazil and Asia now.

'It's a testament to Christine's leadership,' he said, adding that she also strengthened the CLIA staff in the US and Europe with 'a lot of capable people.'

This will be the third CLIA presidential search conducted by Guy Cote, regional managing partner, Americas, for Heidrick & Struggles' Consumer Markets Practice, based in Miami Beach. Cote found both Duffy and her predecessor, Terry Dale.

Since Duffy's hiring, the job description has expanded. Cote outlined the need for a global executive with a dynamic background who can work with diverse lines on a different scale than CLIA did in the past. The position is based in the association's newly consolidated Washington, DC, office, and the next leader has to be comfortable with lobbying and advocacy, as Duffy has been.

Internal CLIA candidates will be considered, along with people inside and outside the cruise industry—'Any and all,' as Cote put it. Though they needn't be from the cruise industry, hopefully they'll have a passion for cruising, he said.

Goldstein confirmed a wide search is planned and he thinks it will draw a diverse selection—professionals with a global background, those who are more Capitol Hill-centric and leaders from private enterprise and other industry associations.

The required skill set is vast: a capable public presence, the ability to work with cruise industry leaders, ease in working around the world, being conversant with Executive Partners who drive a lot of CLIA's revenues, appreciation for the travel agent value proposition, being comfortable with public affairs, adept at dealing with the media and able to promote CLIA's commitment to safety, the environment and public health.

'It's a big job and that stands to reason because the industry is growing. It's growing globally,' Goldstein said. 'We have high expectations, not only for who may be CLIA president and ceo but also for the industry's growth around the world.'

'I think it's going to take a little bit of time,' concurred Stein Kruse, ceo of the Holland America Group.

'Christine's shoes are going to be hard to fill. She did a remarkable job, so finding somebody who fits is not going to be an easy task,' he said, adding that Duffy 'strengthened the organization in a way that has paid dividends.'

In Kruse's view, CLIA needs a 'global thinker' with a 'very, very strong presence' who understands Europe and is prepared for Asia's emerging role.

Meanwhile, Goldstein will be very involved, to ensure a successful transition.

'Howard Frank did a really excellent job as CLIA chairman during very challenging times,' Goldstein said. He, too, is stepping up in what is a very demanding volunteer role apart from his considerable duties at Royal Caribbean.

It won't necessarily go to someone at Norwegian.

'Individual cruise companies don't have allocated seats but we obviously take into consideration the major players as well as being sure the smaller lines are represented,' Goldstein said.

Acting as CLIA spokesperson, he will take part in the association's annual media briefing on Jan. 27 in New York. Then, on behalf of CLIA, Goldstein will be traveling internationally in late February, involved at Cruise Shipping Miami in March and at cruise3sixty in Fort Lauderdale in April.