Goldstein traces the path to an all-weather Quantum 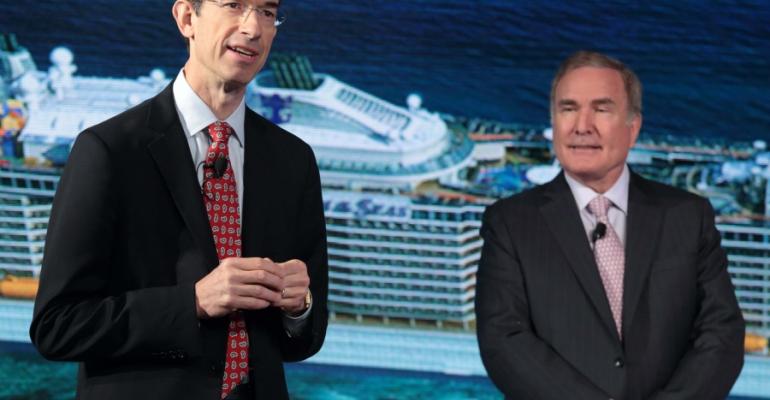 Adam Goldstein - Quantum's enclosed Solarium and SeaPlex give the design a potent advantage in northerly climes like Bayonne, Southampton and Shanghai

Though he's been featured in the Quantum of the Seas debut giving former NFL linebacker Dhani Jones a pounding at table tennis in SeaPlex, Adam Goldstein has lent much more than an athletic perspective to the ship's development.

'I'm extremely pleased to be a part of this, and the way that Richard [Fain] and Harri [Kulovaara] and Lisa [Lutoff-Perlo] and I are involved as a team,' Goldstein told Seatrade Insider during a Quantum inaugural cruise. 'You have to have a team. You have to know what to do, when, and what to expect.

'It's not something people would know unless they've done it many times before, and that's especially important with a project as highly visible at the end as Quantum,' he added.

Quantum-class cruising represents the seventh generation of vessels with Goldstein's participation, some more actively than others. He's now Royal Caribbean Cruises Ltd.'s president and chief operating officer, but his first newbuild, Nordic Empress, was in the context of working at Gotaas-Larsen, shortly before joining Royal Caribbean in 1988.

When the company plans a fresh platform, 'We have enormous expectations but we have to be patient on pulling everything together,' Goldstein said. 'It's an active design process.' And Royal Caribbean doesn't start on this road, he added, without the fundamental belief it can exceed everything it has done before.

'We took this [Quantum] project up immediately after the introduction of Oasis, the height of shipbuilding achievement, something phenomenally groundbreaking,' Goldstein recounted. 'We learned from Oasis and Solstice, and by not setting out to build bigger, but to do something distinctive.'

Goldstein was involved in Nordic Empress planning while at Gotaas-Larsen, one of Royal Caribbean's three founding companies. That's when he first got a taste of the process and when he met Kulovaara, now Royal Caribbean's evp maritime. Then, the novel idea was to build a ship for short (three-/four-day) cruises. At the time, older vessels were usually deployed in that entry-level market.

After 1988's Sovereign of the Seas, Royal Caribbean set to work on Project Vision. Goldstein, who held key roles in marketing and international sales, had some involvement in what stretched to a six-ship series, starting with 1995's Legend of the Seas. And that involvement grew when he led total guest satisfaction (hotel operations) during planning for the Voyager and Radiance classes.

He put a tremendous amount of time into the Voyager, Oasis and Quantum series.

Voyager of the Seas drove a more active 'Get Out There' image of cruising with rock climbing, ice skating and vastly expanded sports and fitness opportunities.

'Voyager marked the beginning of the trajectory Royal Caribbean is on today—dedicated to exceeding expectations and customer service, which goes back to Song of Norway, but now it's a true global cruise brand, one of the biggest, catering to families and making the experience more active,' Goldstein said.

Voyager was amplified by Freedom of the Seas—essentially an elongated Voyager with added features—whose development was driven by former senior executive Dan Hanrahan.

'We approached Oasis [from the perspective of] what could we achieve if we maximized the design, to further increase options, variety and choice?' Goldstein recounted. 'Structurally, we found we could open the middle of the ship. We were able to build it significantly larger and completely maintain a level of personal service.'

Quantum could complement that by providing a design suited to cold-weather cruising.

Goldstein said Bayonne, N.J., service was not in mind at the beginning, but the company was looking at how to provide an appealing experience in more northerly settings. That led to features like an enclosed Solarium, which the previous long-term Bayonne ship, Explorer of the Seas, does not have.

This and spaces such as the huge, multifunctional SeaPlex sports and activity center—fully enclosed and the venue for Goldstein's table tennis triumphs—will be 'a phenomenal advantage for ships leaving out of Shanghai, Southampton and Bayonne,' he said.

Of Quantum's all-weather capability, he asserted: 'There's nothing else like it.'