Great expectations for the Great Lakes 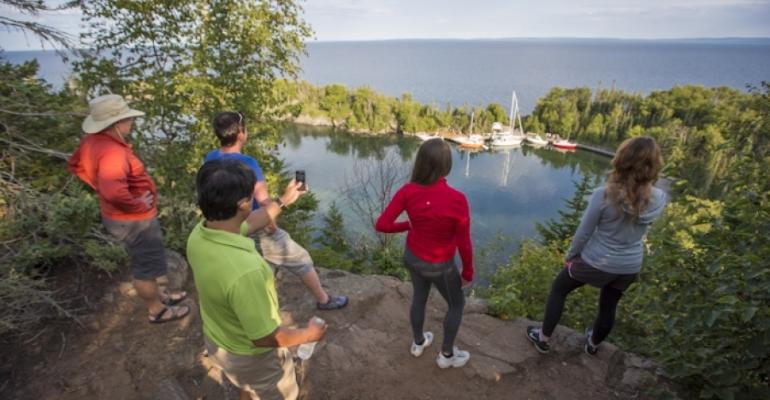 There is more interest now in cruising the Great Lakes than ever before, according to Stephen Burnett, executive director of the Great Lakes Cruising Coalition, citing discussions with lines at Seatrade Cruise Global.

'Without a doubt it was the best Seatrade trade show we've had,' said Burnett, a long-time attendee.

A number of factors are currently working in the Great Lakes' favor. They include the past success of Pearl Seas Cruises and Haimark Line in the region; the opening of Cuba to cruise ships, which gives a profitable counter-season deployment option; and security issues in Europe that have some Americans seeking closer-to-home vacations. Plus, new destinations on Québec's St. Lawrence are drawing more ships to the region.

And there's the coalition's own promotional work. 'We network like crazy and have marvelous members who share information ... We have been a little messianic about [the Great Lakes]. A lot of that is getting through,' Burnett said.

Pearl Seas Cruises' marketing of the Great Lakes 'percolated,' and it is hoped the line will commit a newbuild to the region. Tour operators that worked with Haimark—which chartered Saint Laurent, a coastal ship that is now on the sidelines—are seeking a replacement to meet demand. Ponant, a Great Lakes veteran, is building ships, and at least two European luxury operators are seriously looking at the region.

The former Yorktown, a US-flag vessel that's being renovated under new ownership as Americana, previously operated in the Great Lakes and may snag a charterer or buyer. (The US registry eases the pilotage issue, reducing operating costs.) And American Queen Steamboat Co. has stated it is looking to buy or build a boat to expand into the region and perhaps operate off-season in Cuba.

'The opening of Cuba is going to have a tremendous effect on the Great Lakes,' Burnett predicted. 'Cuba is a very short commute in ship terms. It gives a fantastic opportunity for companies to make money seasonally.'

The emergence of Québec's St. Lawrence in the Canada/New England route has been 'a great benefit to us,' he added. 'Every ship that sails to the Great Lakes comes through that region.'

Plus, Burnett noted the 'incredibly sad factor that international terrorism has taken a lot of places off the map ... That is having a significant effect on how itinerary planners look at the Great Lakes.'

There's already been a shift by some adventure tour operators to Canada with its exotic north and areas like Labrador and the Magdalen Islands seen as places Americans may perceive safer than traveling overseas.

The Great Lakes have much to offer, including iconic cities, port towns with cultural and historic appeal, pristine maritime scenery, wilderness and wildlife.

Among the cities, Cleveland, for example, is home to the internationally famous Rock and Roll Hall of Fame Museum and the Great Lakes Science Center, both within steps of where cruise ships likely would dock, just in front of the Cleveland Browns' stadium, according to William Friedman, president and ceo of the Port of Cleveland.

The lingering perception of Cleveland as a rust-belt city is outdated, according to Friedman, who pointed to the world-class museums, a vibrant food scene, parks and retail outlets.

'There's plenty to do,' he said. 'Cleveland would be one of the premier stops on a cruise. We offer everything Chicago offers but are a little easier to get into and out of.'

Friedman, who chairs the American Great Lakes Ports Association, said members recognize the cruise industry is good for their communities' economic development. He attended Seatrade Cruise Global for the first time this year to better understand the dynamics of the business.

Small cruise ships have plied the Great Lakes for years but Burnett said many areas are unexplored. Lake Superior, for example, offers 'a richness than many planners are not aware of.'

Sault Ste. Marie, Ontario, has a major attraction, the Agawa Canyon Train, a day-long wilderness excursion past lakes, rivers and awesome granite formations. The North Shore's Thunder Bay offers a rich First Nations heritage and Fort William Historical Park, where visitors can experience the heyday of the Canadian fur trade circa 1816. Duluth, Minnesota, is 'like a mini San Francisco, very pretty, surrounded by hills, with a heritage district, lovely architecture and one of the finest steam train museums in the world,' Burnett said.

'Lake Superior is truly an inland sea,' said Paul Pepe, manager of tourism for Thunder Bay. 'As the world’s largest freshwater lake, it offers a stunning geography, a cultural history dating back over 8,000 years and a more modern industrial-based economic heritage that has helped give it a very interesting identity and one that is appealing to discovery cruise consumers.'

The St. Lawrence Seaway locks limit the size of ships that can visit the Great Lakes, but Burnett has counted 70 cruise vessels worldwide that could fit. Straight off his coalition addresses the St. Lawrence certification with operators; though a hull may fit the locks, protrusions such as bridge wings could be an issue.

Another challenge for the region is the cost of pilotage, which makes it tough for small ships to amortize. The Great Lakes Cruising Coalition is a member of the Council of Great Lakes Governors, which is studying that issue.