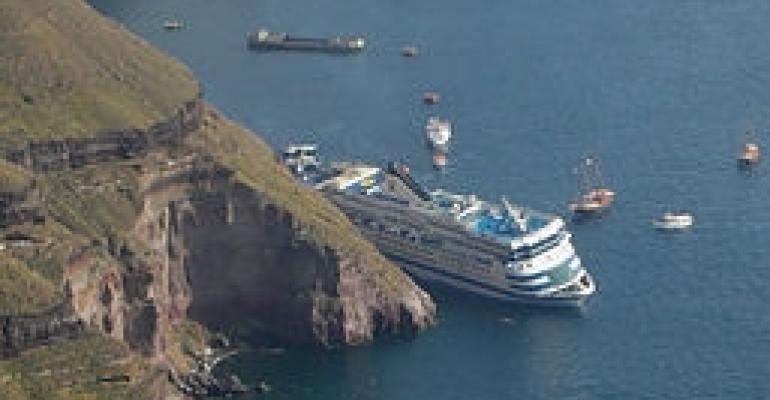 Sea Diamond struck a reef off Santorini in April 2007

The Greek government has ordered the raising of the sunken cruise ship Sea Diamond that foundered just off the popular holiday island of Santorini 10 years ago, leaving two French passengers missing and presumed dead.

As environmentalists and islanders claimed at the time, the shipping ministry has now declared the Sea Diamond wreck poses a potential environmental risk and is a hazard to shipping. Kouroumplis' letter contains no provision for who would pay to remove the wreck. Some experts estimate it could cost hundreds of millions of dollars.

On April 5, 2007, the 143mtr cruise ship struck a volcanic reef in the sea-filled crater formed by a massive volcanic eruption 3,500 years ago. It lies in more than 90mtr-deep water. Some 1,600 passengers and crew were safely evacuated, but a 45-year-old French passenger and his teenage daughter are presumed to have drowned, though divers were unable to locate any bodies.

Pollution was limited, with more concern at the time being expressed about the potential toxins emitted from decaying electronics. Fuel from the wreck was removed in 2009.

Under mounting pressure to raise the wreck the Greek government said in 2011 it could not afford the operation and Louis Hellenic would have to cover the cost.

A seabed survey of the accident area commissioned by the cruise line found that rocks hit by the ship were not marked on the official map. Louis said the chart was drawn in 1989 and included up-to-date official corrections. The decision for the survey was made after a number of unanswered questions cropped up over district attorney investigations.

The order to raise Sea Diamond came in the wake of criticism of the government's handling of the sinking of a small, aged tanker off Salamis island Sept. 10, causing pollution at some of Athens' best known beaches.