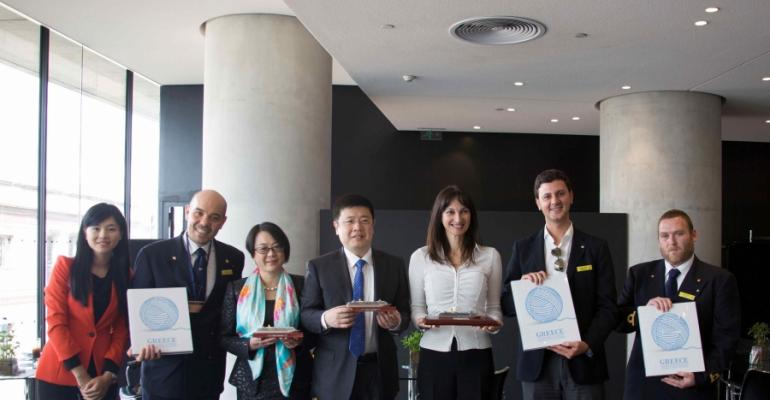 Greek officials and residents rolled out the red carpet to welcome the arrival of the first world cruise dedicated to Chinese travelers. Costa Atlantica, carrying nearly 1,000 passengers, reached Greece as the first stop in Europe following calls at ports in Asia.

Government and port officials and residents turned out to welcome the ship. The Greek government held ceremonies in Heraklion and Athens.

In Heraklion, Crete Tourism Commissioner Michalis Vamiedaki and Heraklion Port Authority ceo Yannis Mpras greeted Costa Atlantica at the port before passengers toured the Palace of Knossos and the Archaeological Museum of Crete.

In Athens, Chinese passenger representatives were welcomed by Greece Tourism Minister Elena Kountoura and China's ambassadors to Greece during a welcome ceremony at the Acropolis Museum followed by a luncheon.

Following its stay in Greece, which includes a stop at Santorini, Costa Atlantica will continue to ports in western Europe including Civitavecchia (Rome) and Barcelona, where water cannons are expected to salute the arrival.

The world cruise embarked in Shanghai on March 1.