The growing importance of sea tourism for Greece’s struggling economy 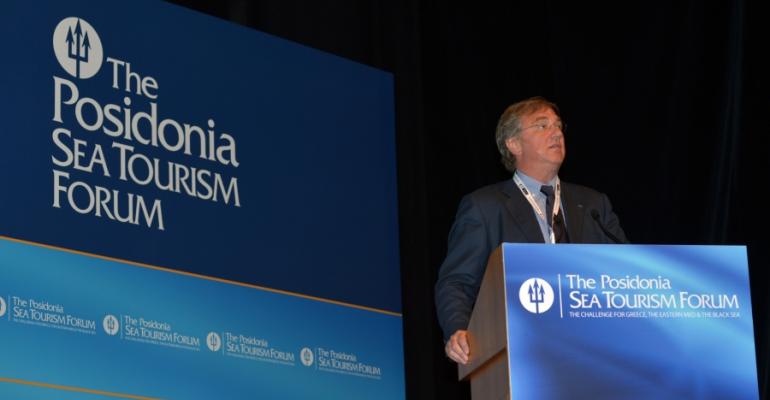 It may have been about sea tourism in the eastern Mediterranean but the opening day of the 3rd Posidonia Sea Tourism Forum in Athens launched very much with Greece in focus and what can be done to realize the huge earning potential for the country’s struggling economy.

Elena Kountoura, Greece’s alternate minister for tourism, opened the forum by highlighting the significant role sea tourism plays for the economic development of Greece. ‘Tourism in general contributes 20% of the country's GDP and contributes 750,000 direct and indirect jobs. We are aiming at prolonging the tourism season in Greece and the cruise sector is a key pillar of our national tourism strategy.’

She told delegates, ‘Our main priority is to attract investments that create jobs for the economic development of local communities. The Greek archipelago is the ideal cruise canvas due to the oversupply of port destinations, steeped in history and culture that give Greece an unparalleled competitive advantage that we must harness to our advantage.’

Greek alternate minister for shipping, Theodoros Dritsas, addressing the second session, said the creation of the National Coordination Committee for Cruising Affairs will be launched in a few days during a crucial juncture for the Greek economy.

‘This committee will play a vital role towards the improvement of infrastructure and regulatory framework which are required in order to help us upgrade our sea tourism product,’ he said.

In between the two ministers, Pierfrancesco Vago, chairman of CLIA Europe, noted existing port infrastructure, homeporting challenges, continuous and unexpected price hikes for major onshore attractions are the main obstacles for the further development of the cruise sector in Greece.

‘The industry needs competitive and a stable and efficient operating environment, but today the hurdles are there for all to see. I urge the Greek authorities to prioritise a port development programme with specific completion timelines and a viable and sustained funding streams,’ he emphasised.

Going beyond Greek borders, Vago said 6m people took a cruise last year in Europe with 1m of them coming from outside Europe, making a significant contribution to the continent's economy.

He reminded that in 2013 the cruise industry contributed €40bn to Europe where 340,000 people are employed by the sector.

According to Vago, direct cruise spending in Greece stands at €570m with a further €1.4bn in indirect spending of which more than a third pays the wages for 11,000 direct jobs.

Larry Pimentel, president and ceo Azamara Club Cruises, looked at the evolution of luxury as a driver for affluent consumer choice.  However, he said geopolitical issues unfortunately play a part in cruise bookings and the present situation in the East Med is having an impact, even over the longer term.

Edie Rodriguez, president and ceo of Crystal Cruises, underscored the importance of compelling story, told by harnessing the power of the Internet to cost effectively promote the region's competitive advantages to big audiences in big cruise feeder markets such as North America.

George Anomeritis, chairman of the Hellenic Ports Association and chairman and md of the Piraeus Port Authority, maintained the Aegean Sea is as safe today as it has been for thousands of years.

A key theme running through all presentations was the need for investments and competitive tax rates to unlock full cruise and yachting potential for Greece. This is especially so as vessels are getting larger and carrying more people than ever to destinations which often lack the infrastructure to handle them.

And as Kyriakos ‘Kerry’ Anastassiadis commented, the cruise sector offers a wonderful opportunity for countries in the East Med to co-operate to everyone’s benefit. ‘We have a regional opportunity to work together,’ said the ceo of Celestyal Cruises, adding, ‘The East Med has the potential to become the world’s leading destination.’