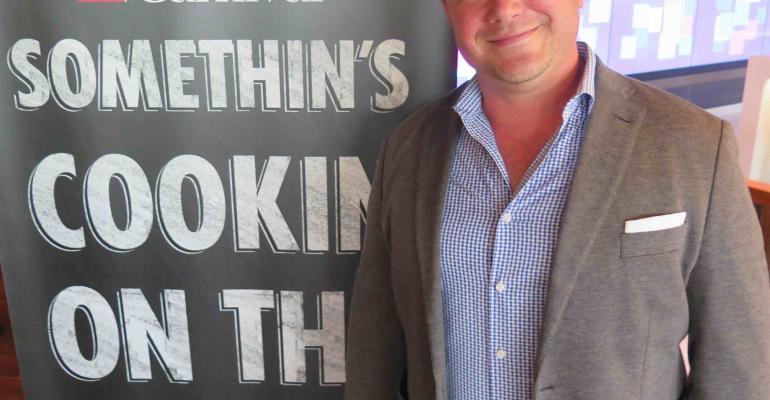 'I'm a seventh generation Texan and this is some of the best barbecue I ever tasted,' Carnival's Edward Allen, VP beverage operations, said at the jam-packed ribbon-cutting.

'If I said it was the best, my father would get really upset,' he added.

Allen, who hails from Houston, said he'd hit 11 of the top 50 Texas barbecue joints and 'this one is up there with them.'

Carnival Horizon made its stateside debut after several weeks of Mediterranean cruises from Barcelona.

The reception to Guy's Pig & Anchor Smokehouse | Brewhouse has been 'fantastic,' Allen told Seatrade Cruise News. The ship's Mediterranean itinerary was port-intensive, with many passengers on full-day tours of Rome, Florence, Provence and other highlights, yet both lunch and dinner service at Guy's had been a 'home run,' he said. People flocked for the beer after long days sightseeing.

Dinner items are offered on an a la carte basis (Trash Can Nachos are $4, while barbecue ribs start at $8), and there's no charge for a self-service barbecue lunch buffet on embarkation day and sea days.

'The sampler of four is the way to go,' Allen said.

When it comes to signature cocktails, the Bacon Manhattan—where the bourbon is infused with bacon fat—must be the most-talked-about. Allen touted a smoked watermelon cocktail and the veggie-infused Bloody Mary.

The Smokehouse | Brewhouse is the latest in the years-long partnership between Carnival and Food Network star Fieri, whose Guy's Burger Joint is hugely popular on the Fun Ship fleet.

Fieri is 'such a great partner and such a good guy,' according to Allen. 'Our guests love him and we love him. He really fits our brand as America's cruise line.'