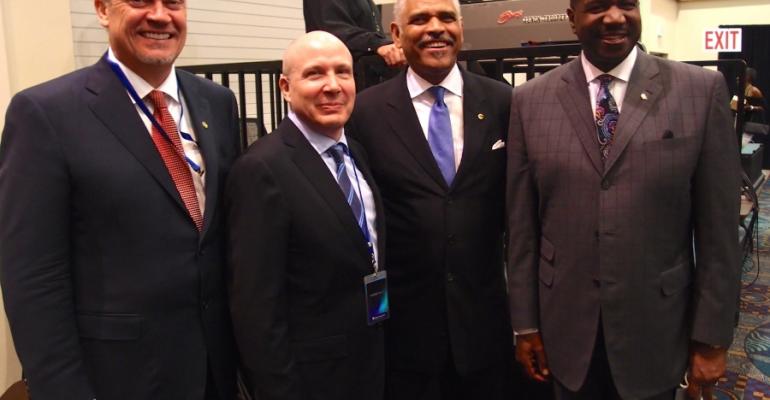 Holland America Line will elevate the cruise ship piano bar concept by partnering with Billboard for 'Billboard Onboard,' an interactive musical history experience, while also bringing intimate chamber music performances to sea in partnership with Lincoln Center for the Performing Arts.

In addition, HAL will extend its relationship with the B.B. King Blues Club, now in its second year, to offer the hit program on Koningsdam, where the act while be housed in the Queens Lounge by night.

The details were unveiled during a packed news conference at Cruise Shipping Miami Tuesday, when the B.B. King Blues Club played a rousing set.

Billboard Onboard will mix it up with many styles of music, while Lincoln Center Stage will offer a piano and string quintet performing classic works in an intimate setting.

Koningsdam will also debut a new main entertainment venue, The World Stage, for performances in traditional theater style or in the round, incorporating a surrounding two-deck high LED screen. 'This will bring a whole new type of production to sea,' said Bill Prince, director of entertainment.

The new additions follow the successful relationship with the B.B. King Blues Club, which is being extended. The concept will go on Rotterdam next month, followed by Koningsdam when it debuts in April next year.

Going forward, HAL—noted for its live music—will have even more musicians on board by adding five to seven performers for about 22 to per ship, Prince said.

He added that the partnership with Lincoln Center Stage is expected to 'expand our net' to people who never though of cruising before.