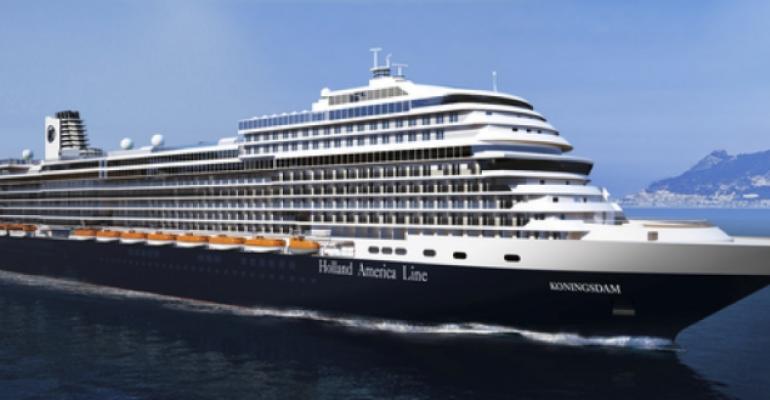 Holland America Line is naming its 2016 Pinnacle-class newbuild Koningsdam. The 99,500gt ship is due for delivery from Fincantieri's Marghera shipyard in February 2016.

Since 1883 every Holland America passenger vessel has borne the 'dam' suffix, and Koningsdam carries on that tradition. 'Koning' means king in Dutch, and the name celebrates what the line called a majestic new ship. The name also pays honor to King Willem-Alexander, the first king of the Netherlands in over a century.

All HAL ships fly the Dutch flag, and the line has many Dutch employees, including most of the fleet’s captains and officers.

Many HAL ships have been named by members of the Dutch royal family over the past 75 years. Most recently, Nieuw Amsterdam was named by Princess Máxima in 2010. And in 2008 Eurodam was named Queen Beatrix of the Netherlands.

'In choosing the name Koningsdam, we are honoring our rich Dutch heritage while reflecting that we’re entering a new era as a company,' said Stein Kruse, ceo of the Holland America Group. 'This new Pinnacle-class ship will be our largest, most contemporary vessel, and it was only fitting to give it a name that embodies great achievement for the future, while embracing timeless tradition.'

HAL noted the ship's increased size provides more opportunities to add new public spaces and venues, and promised several innovative features will debut on board. At the same time, there will be familiar spaces and amenities, the line said.