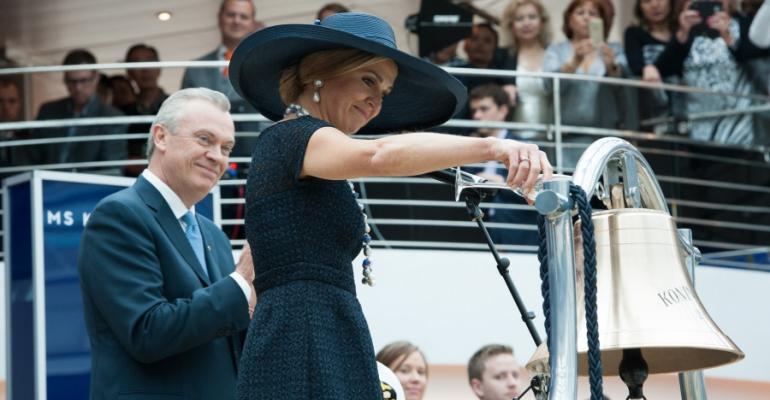 Queen Máxima blesses the ship's bell, applauded by Holland America Group's Stein Kruse (Photo: Mirjam Lems Fotografie)
With the words 'I name thee Koningsdam. May God bless the ship and all who sail on her,' Queen Máxima of the Netherlands pulled a cord, releasing a Jeroboam of Veuve Clicquot to smash against the hull of Holland America Line's newest vessel.

It was the 12th royal naming for Holland America, and the second HAL ship named by Máxima who, as a princess, did the honors for Nieuw Amsterdam in 2010.

Koning means 'king' in Dutch, and the name Koningsdam honors Máxima’s husband, Willem-Alexander, the first king of the Netherlands in over a century.

Crew paraded into the World Stage with flags representing their 44 nations. An orchestra accompanied the festivities for a ship whose interior design was inspired by music. Singer/harpist Iris Kroes, the ‘Voice of Holland’ in 2012, performed before Capt. Emiel de Vries, Holland America Group ceo Stein Kruse and HAL president Orlando Ashford accompanied Máxima to the stage.

The ceremony had begun at the glass-topped Lido area where the queen performed the traditional blessing of the ship's bell. There, advised by Kruse to 'give it a good shake,' she rang the bell with gusto, to applause.

Ashford took the occasion to announce Koningsdam's 2018 sister ship would be called Nieuw Statendam, the sixth vessel in HAL history to bear the name. The first was in 1898.

‘This combines the Dutch word for “new” with a classic name, Statendam,’ Ashford said.

Ashford cited an ‘enduring bond with the people of the Netherlands, which defines our company.’

He added: ‘We’re grateful to be here, happy to be in Rotterdam and glad to be home.'