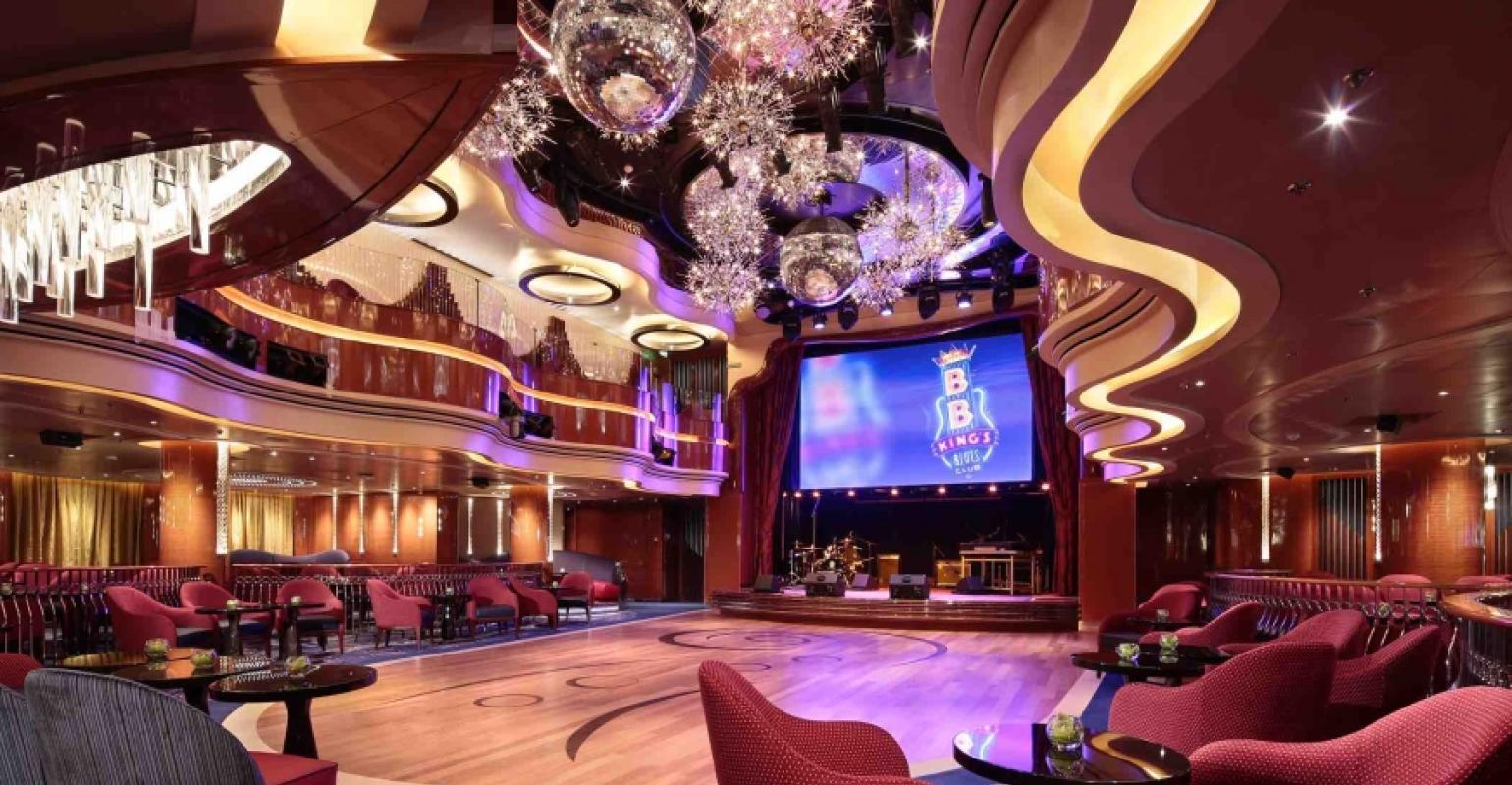 Queen's Lounge - the setting for BB King's Blues Club (Photo: Holland America Line)
Holland America Line's newest and biggest ship is also its brightest and liveliest. The 2,650-passenger Koningsdam has a contemporary style and fresh features that are part of the brand's evolution, following its new 'Savor the Journey' tagline and updated logo.

The interiors—by Adam D. Tihany, in his first work for Holland America, and maritime veteran Bjørn Storbraaten, who designed parts of Eurodam and Nieuw Amsterdam—are a bridge from the line's traditions to its future. Some areas are inspired by music, as is the artwork throughout, while in one of the major new entertainment zones, Music Walk, three venues are dedicated to different music styles.

Koningsdam is now operating its third revenue cruise, and Capt. Emiel de Vries, who has spent his career at HAL, reports that Mariner Society members find the ship 'really different' at first, but Holland America is evolving to continue its success in its next 143 years.

There are 1,500 Mariners of the 2,380 passengers on the current Mediterranean voyage, which is carrying just over 800 Americans, more than 300 Dutch and 300 Australians and more than 200 Canadians. Chinese are among the other nationalities. Most travelers appear to be retirees; just a dozen children are aboard this week.

'The first comment you always get is "The ship is too big,"' hotel director Donatus Habets said. But as cruise director Johnathan Rogers pointed out, many of the public spaces are still intimate. 'We've built an enormous ship by Holland America Line standards, but we right-sized it,' he said.

'Enormous' is relative—at 99,500gt, Koningsdam is not big by competitors' standards, and it's not a huge leap from HAL's last ship, the 87,000gt Nieuw Amsterdam, delivered in 2010.

Passengers applaud Koningsdam's new entertainment options. Among them, Music Walk, an open, flowing space, consists of Lincoln Center Stage, where chamber music concerts are performed in the afternoon and evening; BB King's Blues Club, an eight-piece band that rocks out in the expanded Queen's Lounge; and Billboard Onboard, where two pianists and a DJ play requests and present shows of Billboard's chart-topping hits.

Capt. de Vries noted that Decks 2 and 3, which house Music Walk and other lounges, bars, boutiques, the casino and more, are more open than in previous HAL ship layouts.

'You can go from venue to venue as well as up or down,' he said.

A grand, curving staircase with steps that look like alabaster connects the casino on Deck 3 with Music Walk below. The drawback is that sometimes sounds carry from one spot to another.

Throughout Koningsdam, the music theme is woven into patterns in the carpets, in the clever stairwell art and even the names of four decks (Beethoven, Gershwin, Mozart, Schubert). Traditional Holland America touches include fresh flowers everywhere, and the gracious Indonesian crew provide a strong sense of continuity.

Adam Tihany's two-story dining room is beautiful—cheerful and light, with sunny yellow walls, champagne-colored columns and arches, splashes of crimson and gold in the modern, hand-blown glass chandeliers and a wine tower in a curved, copper sheath.

Tihany's Queen's Lounge, spanning two decks, has the glossy, sensual curves of a violin, and makes extensive use of wood, including for the ample dance floor. The lounge is brightened by clusters of star-like chandeliers and two glittering disco balls.

Storbraaten's Tamarind, the pan-Asian specialty restaurant ($20 surcharge), is a seductive spot of dark woods and leathers, with plum and copper accents. On Koningsdam this exotic hideaway is located all the way aft, overlooking a pool below. The menu has Chinese, Thai, Malaysian, Taiwanese, Japanese and Korean influences. A fresh orchid graces each place setting.

For the first time on a HAL ship, the midships Lido Pool—also designed by Storbraaten—takes up two decks, with the mezzanine housing the sleek Panorama Bar on one side and the New York Deli & Pizza on the other. The deli/pizza counter is open for breakfast bagels and coffee, and midday reubens and made-to-order individual pizzas, including one with Italian sausage, fennel and provolone by the acclaimed chef and HAL Culinary Council member Elizabeth Falkner.

Also on the mezzanine, white, leather-look sofas set at an angle overlook the sea and the pool below. Cushioned loungers and daybeds ring the outside, while towels in lime green, aqua and orange give dashes of color to a very appealing space topped by a retractable glass dome. Movies and documentaries, some from HAL's partnership with BBC Earth, air on the poolside screen.

Almost a theater in the round, the World Stage, with its custom-built, 270-degree panoramic LED screens that rise two decks and stretch 250 feet in length, captivates with several new, original production shows. 'One World,' where an earth mother character propels a story with singers, dancers and aerial acrobats, wows with dramatic backdrops, from mountains to sweeping desert dunes to lava. The show got a standing ovation on the current cruise.

The 667-seat World Stage is also the venue for magic performances, a Beatles tribute show and BBC's 'Frozen Planet,' set to live music.

Koningsdam's new dining features include the Lido buffet area reconfigured into a market with themed stations, from salads and healthy choices to comfort foods.

'They've upgraded an already superior product to make it even better by adding gourmet toppings at the salad bar like seared ahi tuna, and there are touches of those upgrades at the other stations, too,' said David Yeskel, a food writer. The omelet station, for example, now offers crab and avocado, supplementing the lox and other quality ingredients.

A hit with Yeskel and foodies on Koningsdam this week was dinner in the Culinary Arts Center. This venue for cooking classes in partnership with Food & Wine Magazine has expanded on the new ship to add a farm-to-table dinner. Two set menus alternate by day; one starts with golden beet salad drizzled with hazelnut oil, followed by celery and kale risotto and a choice of three entrees, rib eye with roasted parsnip puree, poached sea bass and fennel confit or red quinoa with zucchini. The meal ends with an artisan cheese plate with wild honey or chocolate filled with mascarpone cream.

Diners can watch the chefs prepare the food, and each dish gets extra zest from the fresh cresses grown in the Culinary Arts Center.

'Everything we make is nice and fresh; we don't bulk it up with too many ingredients,' chef Thomas Kargol said. The $39 cover charge includes a craft cocktail and unlimited white and red wine from Washington state.

'It's a unique twist on alternative dining,' food writer Yeskel said. 'It was delicious, innovative and you're immersed in the experience as opposed to a standard restaurant where the kitchen is out of sight.'

Also new is Sel de Mer, an intimate French seafood brasserie with an iced display trolley where diners can view the selection, including a fresh catch of the day (recently, bream) purchased by the chef from a local market. Escargots, foie gras, salt-crust baked branzino, bouillabaisse, Dover sole and coq au vin are among the menu items. HAL's first a la carte restaurant, Sel de Mer has entrees priced from $16 for steamed mussels to $32 for Maine lobster.

Next door and sharing a wall of wines is the elegant Pinnacle Grill, featuring Pacific Northwest dishes and USDA Choice and higher cuts of beef. On Koningsdam this signature HAL venue showcases a new entree honoring company president Orlando Ashford. The 'President's Cut' is a succulent 36-ounce bone-in rib eye that's sliced tableside. It carries a $59 supplement above the grill's $29 cover charge. During the current cruise the 12th President's Cut was ordered since the ship's delivery.

At the central atrium, the new Grand Dutch Café serves espresso drinks, jenever (gin) and other spirits plus European beers on tap. A $2.50 latte, for example, is served in a blue and white porcelain cup atop a small silver tray with a cookie. Patrons can nibble Dutch apple cake, a chocolate-covered cream puff, Dutch pancakes or other goodies with their drink. Cheeses, baguette sandwiches, Maatjes herring on pumpernickel, Dutch pea soup and french fries with mayo are among the savory snacks. There's currently no charge for food ordered with a drink purchase.

Yet another new Koningsdam spot, BLEND, lets passengers become winemakers. At a tasting table for 10, participants get a selection of five cabernet sauvignons, merlots and a cabernet franc from Washington state's Chateau Ste. Michelle to taste and blend into their own wine. It's then bottled for them to drink at dinner or in their stateroom. The cost is $129 per person or $179 per couple.

That may seem steep to some, but hotel director Habets said the wines used cost $80 to $90 a bottle.

Notes, an intriguing little spot nestled in Music Walk, offers a vast selection of international whiskies. Patrons can use iPads to research by age, country or other characteristics. The rarest of dozens of choices is Royal Lochnagar, a single malt scotch whisky.